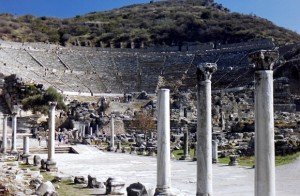 One of the most fascinating places to visit in the country of Turkey is the ancient port city of Ephesus. Although only one third of the city has been completely renovated and restored, its ruins are among the most magnificent of the ancient world. Ephesus during the time of Paul and John would have been equal to our New York City as far as importance and proportionate size. It was one of the three largest cities in the Roman Empire (250,000 est. pop.) and was the major seaport that served all of Asia Minor. Writers of that day referred to it as the “crown jewel” of the Roman Empire. Several biblical events took place here. Paul came here on his second missionary tour and left Priscilla and Aquila to start the church there (Acts 18:19). Paul then came back to Ephesus on his third missionary tour and stayed for almost three years (Acts 19). John, the youngest disciple of Jesus, also came here and was the bishop for all the churches in the area. He wrote to the church in Ephesus in the Book of Revelation, chapter 2. Church history also records that Timothy was here and later became a bishop in the Ephesian church. In addition, most scholars think that Paul wrote the epistles of 1 and 2 Timothy and 1 Corinthians during his three year stay in Ephesus.

If you visit Ephesus you will be able to visit the huge theater that is mentioned in Acts 19. This is the same theater in which the riot described in Acts 19 occurred. This Roman masterpiece held 25,000 or more people and is in remarkable condition, even today. To hear the story of Acts re-read while you are sitting in the theater where it took place is a very moving experience. Let’s look at some history and background that will make this story in the Bible come alive. 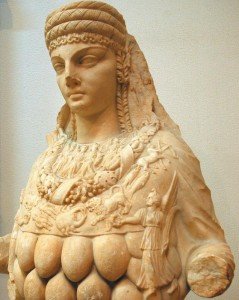 The city of Ephesus was the “neokoris” (temple warden, or for comparison purposes in English, the Vatican) for the worship of the Greek Goddess Artemis. The huge temple of Artemis was just outside the city and was one of the seven ancient wonders of the world. If you wanted to worship Artemis you needed to come to her temple in Ephesus. Artemis was the daughter of Zeus and Leto (an illegitimate relationship) and the twin sister of the male god Apollo. She was known as the goddess of the hunt and wild animals, and was a protector of young girls, virginity, and women in childbirth. In Ephesus, her image was portrayed as a many-breasted, mother goddess who took care of her children. 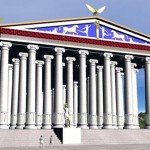 A huge industry grew up around the Artemis cult and silversmiths and carvers made a large profit by making images and figurines of Artemis. Every year a huge festival was held in April to honor Artemis. Estimates of over one million people have been given that appeared from all over the world to attend the festival and ceremonial events each year. During the festival, an enormous procession of people, led by Artemis’ eunuch priests, went through the city with the statue of Artemis in the lead. Against this backdrop, let’s now look at the story of the riot that occurred in Ephesus.

God’s spirit had worked in such a remarkable way in Ephesus that large numbers of people were coming to believe in the Jewish God and His Son, Messiah Jesus. They were bringing their pagan articles and scrolls and burning them in front of the whole city. The Artemis craftsmen were losing all their business because no one was worshiping Artemis any more. The leader of the silversmiths guild, Demetrius, stirred up a riot and they drug some of Paul’s companions into the theater to work them over. The crowd was going wild, with some shouting one thing and some another. The Text says, for two hours they shouted, “Great is Artemis of the Ephesians! Great is Artemis of the Ephesians!” Finally, the mayor of the city was able to get the crowd under control and disassembled.

A couple of faith lessons jump out from this story. First, when was the last time that we got people so excited that they shouted something for two hours? By and large, we have little passion for Christ or spiritual things. Our church experience is usually ho hum; we go to Sunday School and church and then go home. We reserve our passion and excitement for sporting events! For the most part, we aren’t even bothering the devil’s crowd, we don’t want to stir the waters and cause a problem. Look at the chutzpah of Paul. He was willing to take on 25,000 Artemis worshipers! We need to be stirring the pot for Christ!

Another thought that jumps out at you is, “What business or activity of the devil is suffering because of our walk and testimony?” What industry (drug, pornography, etc.) are we shutting down because of our impact? What effect is is our personal influence having on the dark side? As Christian businessmen, what are we doing when evil comes to our city in the form of gay pride parades, etc? Can we even have an impact on our city and our state? All these are sobering thoughts that come out of this moving story of one man’s impact on a city and culture. May God give us the courage to be the kind of testimony that we need to be in a world that is dark and full of the same kinds of things that were going on in Ephesus.