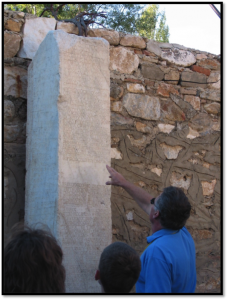 Pillar of the God-fearers

In 1976, archaeologists excavating the ancient city of Aphrodisias in southwest Turkey uncovered an object that is very significant to studiers of the Bible. An eight foot carved marble pillar with several names on it was uncovered in the agora (market place). The part of the agora where the stone was found was thought to be occupied by the Jewish population of the city, because that area contained vats for the dying of garments, an occupation done almost exclusively by Jews. When they extracted and cleaned up the pedestal, they found some interesting information carved on the stone. At the top of the pillar, written in Greek, was a list of over thirty names of Jewish men who were members or founders of the dyers guild (union) in the city. They were common Jewish names that you would recognize today, such as Samuel, Eleazar, and Abraham. After the Jewish listing, there was a gap between the next set of names. The heading for the second set of names was, “theosebeis”, which is Greek for, “God fearers”. Fifty-seven Greek names (more in number than the Jewish names) were then listed as also being members or a part of this Jewish community. This is very significant because it parallels the Bible’s account of a group of people who were Gentiles, but who bought in to the Jewish lifestyle and worshiped the Jewish God. Think for a second how the Jewish lifestyle would have stood out in this very pagan, Greek, world. The Jews only worshiped one God and they didn’t even have a statue or picture of their God to look at and worship! The Greeks had a pantheon of gods, and there were statues and temples to them everywhere. The Jewish people really stood out, with their dress, the way they ate (kosher), their observance of the Sabbath, circumcision, and not cutting the corners of their hair. They lived a very moral and faithful lifestyle compared to the pagans around them because they did not eat meat with blood or participate in the orgies that were so common in the worship of the Greek gods.

Evidently this lifestyle was attractive to some of the Greeks and Romans and they wanted to be a part of this type of community. What did they have to do to get in and be a part of the Jewish community? The Jewish people had a heated discussion about what would be required to let the Gentiles in. Some said that it would have to be “all or none” and they would have to do everything that a Jewish male would do, from circumcision to keeping all the dietary laws, etc. Others said that this was too big a burden to put on someone and that they should just have to keep some lesser restrictions. This is what the Jerusalem Council in Acts 15 was discussing, “What do we have the Gentiles do to be a part of our community of faith?” If you read Acts 15:19-20 and the footnotes, you will see that they decided that just the laws of Noah would be enough to require of these people to become a part of their community.

Once these God fearers were accepted they could go to synagogue and to the Feasts the Jews celebrated each year. They could enter the Temple in Jerusalem, but were only allowed in as far as the Gentile Court. The Bible has several incidences that include God fearers. Cornelius, in Acts 10:1-2, was called a God fearer and was the one that Peter was involved with when God showed him that the Gentiles were going to be included in this new order. Paul, in several places in Acts, when he went to the synagogue, always made an attempt to reach the God fearers that were present (see Acts 13:16, Acts 14:1, Acts 17:1-4, Acts 11-12, Acts 16-17, and Acts 18:4).

The exciting part of all this it that the God fearers were the ancestors of us as modern day Gentile Christians! These “goyim” (Jewish for Gentiles) became “theosebeis” (God fearers) and served the one God and lived a moral, upright lifestyle in a very pagan world and then carried it over the centuries to us. These are the believers on whose shoulders we stand, our roots! Thankfully, these Gentiles accepted the call of the God of Heaven and Earth and followed Him faithfully so that we would have the opportunity to do the same all these centuries later.

Names removed from the stone

P.S. One more interesting thing was noted on the Pillar of the God Fearers. It was evident that some of the names at some point in time had been cut off and a new name put in it’s place. Evidently, you could lose your place in the community and some were taken off the roles and lost their title. This makes Revelations 3:5 a very interesting read. It says, “I will never blot out (the literal Greek is ,”cut out”), his name from the Book of Life…”. God’s pillar in heaven won’t have names chipped out- our position will be secure. 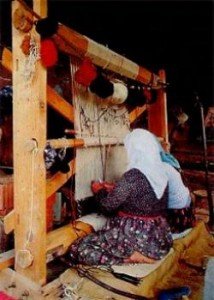