Jesus answered, “I tell you, Peter, before the rooster crows today, you will deny three times that you know me.” –  Luke 22:34 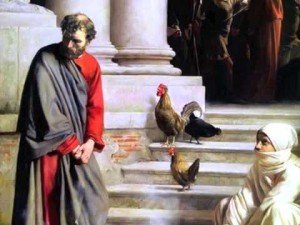 Here is an interesting piece of information that I learned from my rabbi recently while studying the story of the crucifixion. It doesn’t change the story in any way and is a fact that can’t be confirmed with certainty, but it is something fun to think about. However, it does point out again, as we have seen so many times, that we have a hard time understanding some of the sayings of Jesus because we didn’t live in that time period and don’t know the idioms they used or what the original wording might have meant.

All four gospels tell the story of Peter denying Jesus during His arrest and trial. Immediately after the third denial, Peter hears a rooster crow. Was there a rooster in the area where the trial took place in upper Jerusalem that crowed at that moment or was it something else? Or, did we miss something? Let’s take a look.

“No cocks or hens must be raised in Jerusalem (even by laymen), because of the voluntary offerings (the meat of which may be eaten in any part of the city, and as the habit of the named fowls is to peck with their beaks in the rubbish, they may peck into a dead reptile and then peck in the meat of the offerings). In all other parts of Palestine priests only must not raise them, as they use leave-offerings for their meals, and they must be very careful about cleanliness.”

The fear was because they are such a messy animal, their presence might defile some of the holy items used in the sacrifices that were to be eaten. Could this be possible that it wasn’t a rooster? We’ve all seen and heard the rooster crowing in plays and on the movie programs!

If it wasn’t a rooster, what was it? The answer lies in the division of the night watches during Jesus’ time. The Romans divided each day into three hour blocks and the night blocks were called watches (see also study Bible notes on Matthew 14:25). The first night watch began at 6:00 p.m. and lasted until 9:00 p.m. The second watch ended at midnight, the third at 3:00 a.m., and the 4th at 6:00 a.m. or sunrise. Jesus seems to confirm this when He tells the disciples in an earlier story in Mark 13:35 of these same four divisions:

“Therefore keep watch because you do not know when the owner of the house will come back—whether in the evening, or at midnight, or when the rooster crows, or at dawn. –Mark  13:35

Notice that Jesus call the  3rd watch, “the rooster crows”, and makes a distinction between rooster crowing and dawn.

The Romans used the tuba, the cornu (pictured), and the bucina to sound reveille (cock-crow)

The signal the Roman divisions used to change the guard for each shift was a trumpet call. The Latin word for trumpet call (the language spoken by the soldiers) is “gullicinium”, which means, “cock-crowing”. At the end of the 3 a.m. and 6 a.m. shifts, the guard change was announced by a Roman “cock-crowing” or blowing of a trumpet. What Peter heard probably wasn’t an actual rooster crowing, but the end of the watch trumpet call! Jesus used that same phrase to describe it.

Although this knowledge doesn’t change the intent or outcome of the Peter story, it is just interesting to see that there are often things from the time period that we may not have understood clearly and therefore get missed in the translation.