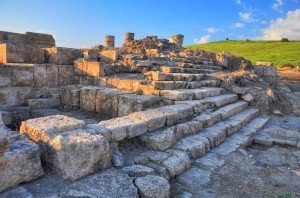 One of the most interesting places we visited on our trip to Israel was a recent archaeological excavation near the town of Omrit, in the northernmost part of Israel. Newly discovered ruins there have placed this as the location where the main traveled road through Israel turned northeast out of the Jordan River Valley towards Damascus. Archaeologists had never known the exact location of the Damascus Road that Saul was on when he was met and blinded by the Lord Jesus. An ornate temple complex to Caesar Augustus and elaborate colonnaded streets and shops confirm that this was the “doorway” into Israel from the North. This find made for an exciting visit for the New Testament believer because you could imagine this as a place that Saul came by on his way to persecute Christians in Damascus. Just a few miles north and east of here he was blinded by a light and heard the audible voice of Jesus speaking to him. This is one of the seminal events in Christianity and Saul’s life was completely changed by this miraculous encounter. Sitting in the temple ruins, near the paved street running to the northeast, we read Acts Chapter 9 out loud and heard the story of God calling Saul to be His chosen instrument to get his message out to both Jews and Gentiles.

There is a tendency to think of Saul’s Damascus Road experience as a unique and isolated event that God put in motion. However, if you look at the experiences of almost all the prophets in the Old Testament you will see some remarkable similarities. Because Saul knew all these stories, he would have probably identified with what happened to them when they were being called by God. Let’s look at some of these Hebrew prophets and see what the similarities are.

The point of this little study is that Saul, a devout student of the text (a Pharisee of Pharisees), would have been familiar with all these prophets and God’s call on their lives. When God spoke out of the heavens in an audible voice, calling his name twice, in the presence of blinding lights and shaking earth and terrified companions, Saul knew that he was being called by God to something special! Then Saul, like Jonah, was plunged into darkness for three days! Saul obediently responded just like all the others after being visited by God. He boldly went and told both Jews and Gentiles without fear of what man could do to him! God met Saul on the Damascus Road and commissioned him in a very familiar way, and Saul was equal to those great prophets of old in every way.

« Jesus Calms the Storm
From Saul To Paul »

One thought on “A Call to the Jews and Gentiles”