Most of us are familiar with Jesus words to his disciples in Matthew 5:14,” You are the light of the world. A city on a hill cannot be hidden.” The obvious and most common teaching on this passage is, as the Christian community, we’re supposed to stand out and be different, be a light to the world around us. However, if we study the culture of Jesus day and see what part the city played in their lives, we will discover that there was probably a lot more that was being said by Jesus when he made that statement. What did Jesus mean when he told us to be a city on a hill? 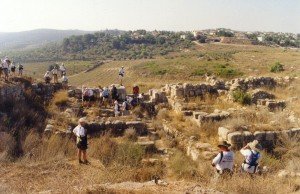 Standing in the gate at Tel Gezer, Israel

First of all, the whole concept of city and city life is so different for us than it was for people in Bible times. Americans don’t like the crowds, the crime and the hectic pace that comes with city living. The American dream is to move out to the country. We want to get out of the bustle of the city and have a secluded ten acre plot where we don’t have to see a lot of people. Our desire is to live in the country and only drive to the city when we have to. We are self sufficient in suburbia and the city doesn’t have much appeal to us and we don’t have much need for it.

In the ancient world, however, the city was life. Within its walls was where food (oil and grain) could be stored. Every city made a secure place where food could be stored in case of famine and drought. Do you remember the story in Genesis where Joseph, in Egypt, stored up large amounts of grain in preparation for seven years of famine? Also, the city was where the most plentiful, reliable and protected source of water could be found. Cities naturally sprung up around the best sources of water and they always put them inside the city walls so that they would have access to it during times of siege. Lastly, and very importantly, behind the city walls was where you would have protection from the enemy. All major cities were walled and well fortified to protect their inhabitants.

Now, think of what the city provided and how important it was to the people of the land. Where would you go if you were hungry? Where would you go if you were thirsty? Where could you have security and be protected from what threatened you? Cities, in that time, were not places that you wanted to move away from. Cities were where you wanted to be, because that is where the necessities of life were provided. The city was literally your salvation and hope in times of trouble.

With this background, when Jesus told us to be a “city on a hill”, could we have missed a significant portion of what he was saying? A “city on a hill” in Jesus day was not just a huge billboard that said, “Followers of God Welcome”! It was a place where people in trouble went in order to have their basic needs met. If you were hungry or thirsty, or needing protection from the enemy, the ruler of the city said, “Come in! We’ll help!”

With these comparisons in mind, how do our present day church communities compare as a true “city on a hill?” In many cases our churches are more like fortresses to keep people out, rather than inviting them in to share what they have. Many Christians and their church communities lean toward isolation and insulation rather than accommodation. We have our own little faithful community, our own Christian schools, our own church language, programs and procedures. Our method of operation doesn’t lend itself well to inviting outsiders to come in. If we are to be a “city on a hill” in the manner of cities of Jesus day, we probably have some changing to do. We need to be a beacon to hurting people saying, “Are you hungry, are you thirsty, are you in trouble? Come in! We have food and water and we will help you with what is causing you trouble!” Our goal, our mission should be to bring people in and show them the blessings the city and the Christian faith provide. Then we will be the light of the world and that city on a hill that the world so desperately needs. 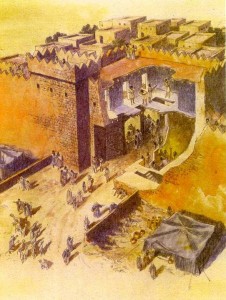 Cutaway of an ancient city gate

P.S. An interesting side note to studying cities of ancient Israel is to learn about the city gates. The city gates performed many functions. Obviously they provided security because they kept the bad people out and good people in. They were also a place where commerce was conducted because of the traffic going in and out of the gates. However, one of the more interesting functions of the city gate was that this was where justice and law were carried out. The ruler or king of the city, “sat in the gate”, and decided all questions and legal matters and pronounced judgment on wrong doers. Several examples of this occur in Scripture (Lot at Sodom in Genesis 19:1; Ruth and Boaz in Ruth 4:1-12; Absalom in 2nd Samuel 15:1-6, to name a few). What makes this so interesting is that from this concept of the King sitting in the gate and pronouncing judgment, we get the concept and the image of the “pearly gates of heaven”! From the images provided in Revelation 21:12 and 21 and 22:14, we get the heavenly picture that we will all stand one day before the gates made of pearl and will be judged by the king before we can enter the heavenly city. It was enlightening to see that God used the practices found in ancient city life to describe what the future heavenly city will be like. As believers may we be tireless in our efforts to invite the weary traveler into our Christian communities so that they can one day experience the king saying, “Come in! Well done thou good and faithful servant!”

« John’s Baptism of Repentance
The Rabbi and the Scorpion: The Fear of the Lord is the Beginning of Wisdom »