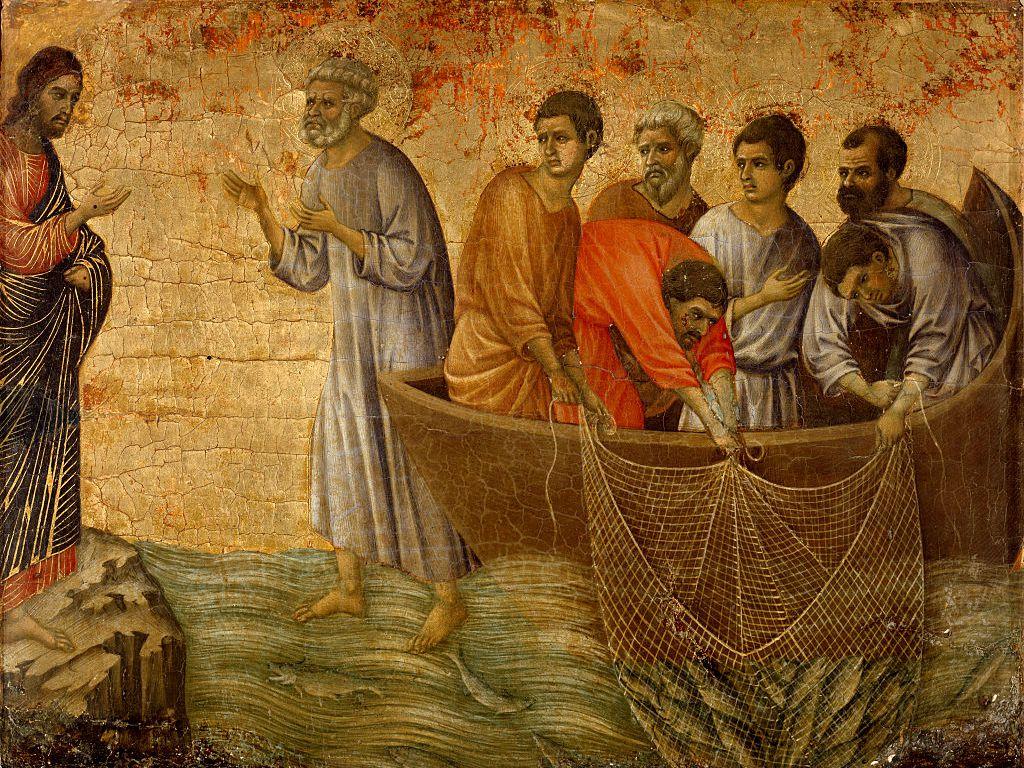 When Jesus was raised from the dead, both Matthew (28: 7 &10) and Mark (16:7) record that Jesus instructed the disciples that he would go ahead of them and would meet them in Galilee. He had actually told Peter the same thing even earlier, on the night of his arrest (Matt 26:32) The text, however, doesn’t record if the disciples were expecting and looking for Jesus when they did go back to where they had been discipled by their rabbi for the past three years. We do know from John’s account that a large portion (7) of the disciples were in the Galilee one week after the resurrection (John 21:1-3). The event we will look at today in John 21 is often referred to as the” Miraculous Catch of Fish”.

In this story, Peter decides to go fishing in the Sea of Galilee (called the Sea of Tiberius in this account) and the other six disciples decide to go with him. The text records that they fished all night but caught nothing. (A funny side note is that in both instances in the gospels where it records the disciples fishing, (Luke 5:4-7 and here in John 21), they don’t catch any fish!)

Early in the morning, Jesus appeared on the shore, close to where they were fishing. He calls out to the seven and asks them if they had caught any fish. They answered, “No”, but didn’t realize that they were talking to Jesus. Jesus then told them to throw the net on the other side and when they did, they caught so many fish that they couldn’t pull the net in. Because this was exactly what had happened to Peter in the earlier fishing incident in Luke 5, Peter realizes that it has to be Jesus on the bank! He shouts, “It is the Lord!” and immediately jumped into the water to get to him. (Read the whole account in John 21:1-14)

Here is the cool part of the story and something that you might not have picked up on if you didn’t know something about Old Testament imagery. In John 21:9 it says, “when the disciples got to the shore, they saw a fire of burning coals, with fish on it and some bread”. Why would the text say, “a fire of burning coals”? Don’t all fires have burning coals? Why do we need to know that extra detail? What do burning coals represent in the Bible? In Genesis (Ch.15) and Exodus (Ch.3 and 19 for ex.), God is represented by and is associated with smoke fire, and burning coals. In 2 Samuel 22:9, David describes God with burning coals in his mouth. Burning coals in the text are a metaphor for the presence of God. In Proverbs 25:21-22, it says,” if you are kind to your enemy, you are heaping burning coals on his head”. Does that mean that you are trying to hurt him or make him feel bad? Paul later quotes this same verse in Romans 12:20, to explain, “if you forgive someone who has wronged you, then you are bringing the presence of God into the situation by heaping God (burning coals) on them. So, what does this have to do with the situation in John?

Who was the first disciple who ran to meet Jesus at the fire of burning coals? Peter, who just a week earlier had denied his Lord three times and hidden during the crucifixion! Did the author mention the burning coals to let the informed reader know that Jesus was going to forgive Peter and show him God’s presence like the verses in Proverbs and Romans say? Was Jesus going to heap burning coals on Peter? In the very next verses, Jesus forgives Peter and reinstates him and commissions him to be the one to feed the sheep. Did Peter feel forgiven?

We know from the text in Acts that Peter is back again at the forefront when the day of Pentecost comes in Acts 1 and 2. Three thousand people were saved and baptized in response to his powerful message (Acts 2:41). Peter goes on to be a major figure in the book of Acts (Ch.s 3,4,5,8,10,11) and is the founder of the New Testament church. He wrote two books that are in the canon of scripture (1 and 2 Peter) and church history records he died by crucifixion in Rome, just like his rabbi. Because Jesus forgave him and heaped burning coals on Peter’s head, Peter was set free to be one of the main figures in the spread of Christianity from Rome to the ends of the world.

P. S. It also says that they caught 153 fish. There has to be some reason that the number 153 is given! You can look it up and several ideas have been presented, but it seems that God has hidden that one pretty well! We will ask him someday.

3 thoughts on “A Fire of Burning Coals”