On a Sabbath Jesus was teaching in one of the synagogues, and a woman was there who had been crippled by a spirit for eighteen years. She was bent over and could not straighten up at all. When Jesus saw her, he called her forward and said to her, “Woman, you are set free from your infirmity.” Then he put his hands on her, and immediately she straightened up and praised God.

The Lord answered him, “You hypocrites! Doesn’t each of you on the Sabbath untie your ox or donkey from the stall and lead it out to give it water? Then should not this woman, a daughter of Abraham, whom Satan has kept bound for eighteen long years, be set free on the Sabbath day from what bound her?”

When he said this, all his opponents were humiliated, but the people were delighted with all the wonderful things he was doing. 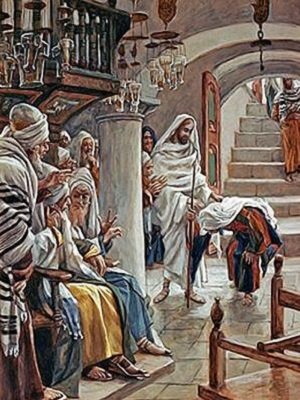 The account of Jesus healing a crippled woman on the Sabbath is a Bible story that most of us are familiar with. However, a careful re-reading of this story with some cultural details added brings out some delightful surprises. Let’s take a look.

In Luke 13:10 it says that Jesus was teaching in one of the synagogues on the Sabbath. A woman who had been crippled and bent over for eighteen years was there to listen to His teaching. Jesus spoke to her and called her forward and healed her. This evidently stirred up a firestorm of controversy because Jesus had healed or done work on the Sabbath. This was an area that Jesus had been constantly attacked over. A look back at Luke 6:1-12 as well as Luke 14:1-6 and John 5:1-18 shows several more examples of these confrontations. From our previous Rabbi studies (see Jesus, A Jewish Rabbi, Part 3 & Part 4) we learned that Jesus was a Rabbi with “s’mekah” or authority. This meant that He had the authority to overrule old laws and make new interpretations concerning the Jewish oral laws and traditions that the Pharisees were so rigid on. In Mark 2:27, Jesus gave one of these new interpretations in response to being criticized for misusing the Sabbath. He said, “The Sabbath was made for man, not man for the Sabbath. So, the Son of Man is Lord even of the Sabbath.”

When Jesus healed the woman in Luke 13, The NIV says that He said to her, “Woman you are set free from your infirmity.” The literal Greek translated there is, “woman you are ‘untied’ from your infirmity.” Knowing this one word is a huge key to understanding the rest of the story and how He used it to make the Pharisees look bad. Jesus then calls the Pharisees hypocrites because that very Sabbath morning they had “untied” their livestock and had taken them out to eat and drink and relieve themselves, yet they were criticizing Him for “untying” this woman and releasing her from her infirmity! “Which is more important to do on the Sabbath?”, Jesus asked, “untying your livestock or this woman?” His opponents were humiliated and all the people listening were delighted at Jesus’ common sense new interpretation of the Sabbath laws.

A cultural detail that is interesting and important to this story is that in the Middle East, during this time in history, people kept some of their more important animals in the house with them at night. People slept in a raised area of the house and kept their animals in a step down area by the entrance (see diagram in the story of “No Room in the Inn”). Every morning when they began their day they would untie and let the animals out of the house to relieve themselves. The Sabbath would have been no exception; they had to be let out every day. Jesus was saying to the Pharisees, “Look how unreasonable and unbending you are. You have no problem untying your animals on the Sabbath, yet you won’t let me “untie” this woman from an infirmity that has plagued her for years!” What is the difference? His adversaries were put to shame! This story is a great example of why Jesus was well thought of and followed by such a huge crowd of people. They were amazed at His authority and His ability to make such brilliant and fresh new interpretations of the Laws of Moses.

« Behold the Man
What’s Wrong with This Picture? »