In Exodus 17:15, after the Israelites were victorious over the Amalekites at Rephidim, it says that Moses built an altar there and called it Adonai Nissi, or” the Lord is our banner”. I had heard this term before, when a pastor preached on the names of God, such as “Jireh” provider, “Rapha” our healer, and others. But, I never had a real clear picture of how the Lord could be a banner, until I went to Egypt. 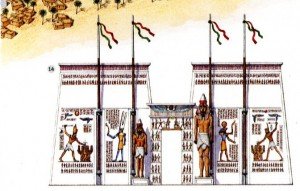 First of all, “Nissi” means banner, standard, ensign, or marker. The flagpole and banner were very meaningful, even back in ancient civilization. As we began to study the Pharaoh’s at their temples, we learned that they used the flagpole to display their banners in front of every structure. They built huge, elaborate entrances to their temples and used the flagpoles to decorate the entrances. They would build a series of pylons along the front with an indentation every so often. In these recesses would go huge flagpoles, up to 100 feet high, with the banners of the king.

In fact, the hieroglyphic symbol for kingship or authority, god, and temple is the flag and flagpole. We saw this all over Egypt, carved into their stories in stone. They were saying, “He is our King, everything we do we do for Him.”

Later in the Exodus story, Numbers 21:8-9, Moses puts a snake on a pole, and it becomes like a banner. 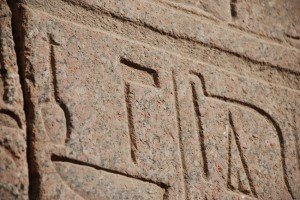 Also, in Isaiah 11:1-10, especially verse 10 – “In that day the Root of Jesse will stand as a banner for the peoples…”. Then Jesus says in John 3:14-15 – “Just as Moses lifted up the snake in the desert, so the Son of Man must be lifted up, that everyone who believes in him may have eternal life.” As we have seen so often in studying the Exodus, it always ties back to Jesus. The banner that Moses lifts up becomes pictures of our Messiah 1500 years later.
The Lord Almighty, and his son Jesus are our banners, our ensigns, our standard and, everything we do, we do for them.

This was another great example to me that if you know the culture and history, the story was easier to understand. I now have a good mental picture of the Lord, being our banner. He is our king and we wave his banner high!

« Who gets the credit?
Sacred Places vs. Sacred Moments »

3 thoughts on “Adonai Nissi: The Lord, Our Banner”