And he took the calf the people had made and burned it in the fire; then he ground it to powder, scattered it on the water and made the Israelites drink it.
— Exodus 32:20 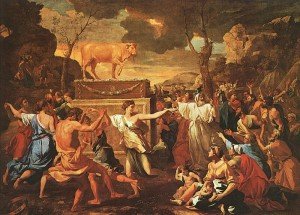 As you read the story of the Golden Calf Incident in Exodus 32, Moses does what appeared to be a random and strange event. He took the golden calf, burned it in the fire, and then ground it into powder. Next, he scattered the dust of the golden calf over the water and made all the Israelites drink it. I always wondered why Moses did that and what was accomplished by making them drink the dust and water. As usual, I didn’t know my text, and was shown by my teacher why Moses did this to the Israelites.

If you look in Numbers 5:11-24, you will see that God gave Moses a test to determine if a wife had secretly been unfaithful to her husband. If a husband suspected that his wife had been impure and unfaithful, he was to take her to the priest. The priest would take some of the holy water and put some dust from the tabernacle floor in the water and then make the woman drink it. If she was guilty of immorality her abdomen would immediately start to swell up and she would be under terrible suffering and would be childless from then on. She was to be under a curse for her unfaithfulness.

This was exactly what Moses did to the Israelites! God was saying, “You have been an unfaithful wife to me, you have chased after other gods. I’m going to give you the test for an unfaithful wife and if you are guilty, you will pay dearly for it.” God brought severe punishment on them for their unfaithfulness. Three thousand died that day for their role in committing spiritual adultery. Although the text doesn’t specifically say it, it is possible that the ones that got sick were the ones that were killed by the sword.

This adds so much more meaning to the Exodus story. God had told the Israelites that he loved them like a bride, that he would take them for his own, and brought them to himself. While he and Moses were up on the mountain writing the marriage contract (Ten Commandments), his bride was down below committing adultery! God was mad at them for their unfaithfulness and made them pay for their sin. But, as we so often see in the scriptures, God takes them back and starts over again.

One thought on “An Unfaithful Wife”