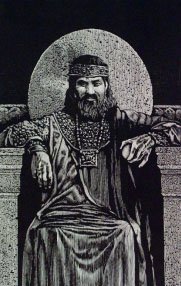 If you’ve ever read 1 Samuel 8, it is a sobering reminder of where we are as a country here in the USA, today. As we go through the story, listen for the similarities to our current situation. Here is the storyline: The people were tired of the corruptness of the judges in Israel, so they told Samuel that they wanted a change. Instead of our old system, “we want a new one”. “We want a King who will give us more of what we need and who will take better care of us”. “We want to be like all the other nations”, said the Israelites. God issued a warning to the people through Samuel. He said, “If I give you a King, you will end up becoming a slave to him and his system of government”. This warning should have awakened them from their wrong thinking, because just a few generations past, their forefathers were slaves to the Egyptians. Surely they would not have chosen that kind of path again! But they insisted on having an earthly King and in the process rejected God as their provider and King. Unfortunately, for them, God granted their wish. The warning that God gives is a negative blueprint of what government is not supposed to look like. Look at the warning, beginning in verse eleven. It does not warn of the King being brutal or torturing people, or setting up idols, or failing to protect his subjects from their enemies. The warning consists of three words – “he will take“. Six times (I don’t think that this is coincidental – remember what the number six means) in the next eight verses he says the same three words,” he will take”. It’s the focal point of the entire warning.

What is really interesting about this warning is that God doesn’t say that the king will take everything you have. He says the King will take the “best” and a “tenth”. What is God saying here? What did God asked the people to give to him in the book of Leviticus? A tenth and the first fruits of your increase was what God required. The Scripture is implying that the King will begin to act as if he is God. He( the King) is the one who is entitled to your first fruits, your best. The first fruits, which were supposed to go to God, now go to the government. Does this speak to the position we are in today in America? We cannot give our first fruits to God because they are already withheld from our checks! By the time we get our money, the first fruits are already spent. I wonder if God is happy with the second fruits?

Look at the “he will take’s”. He will take our sons for his army. He will take our daughters to be in his palace for his own use. He will take the best of our land, produce, and livestock. And the final warning is the most sobering of all “and you will become the government’s slaves. In that day, you will cry out for relief from the King you have chosen and the Lord will not answer.”

God’s warning in 1 Samuel 8 is that the government can end up operating and acting like God and we will eventually become slaves to it. Without trying to be too political, I think we can see the handwriting on the wall here. We now look to the government to provide what we should be asking and counting on God to provide. Because we have done this over a period of time, our people have now become slaves to the state. It is demanding more and more of the fruits of our labor to help keep the cycle going. Now that we are in a “mell of a hess”, we are crying out for relief and God is not answering.

A postscript from this that even makes the point even closer occurs in chapter nine. The people elect Saul to be their king, not because he was necessarily the wisest or best choice, but because he was impressive looking (of kingly stature) – tall dark and handsome. He turned out to be a terrible mistake, because the people had not sought God and had picked him for the wrong reasons.

You can draw your own conclusions of how it fits the pattern we are in today. Obviously, God does not want the government acting like him and trying to be our caretaker. For what it’s worth, I wanted to share the story with you and see what you thought. Is this where we are? Is the Old (Hebrew Testament still speaking to us today?

One thought on “And the King Will Take a Tenth”