Watch out for false prophets. They come to you in sheep’s clothing, but inwardly they are ferocious wolves. By their fruit you will recognize them. Do people pick grapes from thornbushes, or figs from thistles? Likewise every good tree bears good fruit, but a bad tree bears bad fruit. A good tree cannot bear bad fruit, and a bad tree cannot bear good fruit. Every tree that does not bear good fruit is cut down and thrown into the fire. Thus, by their fruit you will recognize them.
—Matthew 7:15-20

This is what the LORD says:
“Cursed is the one who trusts in man,
who depends on flesh for his strength
and whose heart turns away from the LORD.

He will be like a bush in the wastelands;
he will not see prosperity when it comes.
He will dwell in the parched places of the desert,
in a salt land where no one lives.

“But blessed is the man who trusts in the LORD,
whose confidence is in him.

He will be like a tree planted by the water
that sends out its roots by the stream.
It does not fear when heat comes;
its leaves are always green.
It has no worries in a year of drought
and never fails to bear fruit.”
— Jeremiah 17:5-8 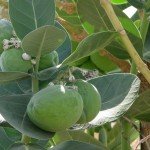 This tree was definitely the most interesting and strangest tree we saw while in the desert. Its real name is “Tapua Sadoma” (“Tapuach Sdom”) which translates “Sodom Apple”. It has a woody branch and big jungle green magnolia type leaves on it. It grows quite of bit of fruit on it during the season. The bright green fruit is the size and look of a grapefruit, but it has nothing but a milky substance inside and is not edible. The plant supposedly has extremely deep roots and can survive harsh desert conditions. When we were on the Scout trip to Egypt, we saw several of the trees growing in the wadis. However, the one RVL picked out to film and talk about was dead when we got back to it the next year. He was real disappointed, but we filmed anyway.

If you look in the Jeremiah passage, the bush in the wasteland, translated in English (Strong’s #6199), is the Arare tree in Hebrew. “Cursed is the man…” the passage starts out and the same root word for cursed is the root word for arare.

The picture painted in the Jeremiah passage is of someone who trusts in themselves, or tries to make it on their own strength or talent. This is where the arare tree comparison comes in. You will look like the arare tree – good on the outside, but when we see the fruit there is nothing there. 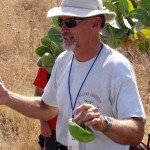 Then it goes on to say,” blessed is the man who trusts in the Lord, he will be like the tree planted by the water”, (this is the acacia tree that was on a previous post). Both plants grow in the same wadi, the same desert, in the same water. One gives back after drawing from the water source, the other drinks and looks good but offers nothing. Will you depend on God or will you try to do it yourself? Will you bring forth fruit and not wither when the heat comes, or will you just be a hollow shell that won’t be able to take the heat? These are some more great thoughts from the desert images.

post scriptum: In addition to the faith lesson, I wanted to share a few additional side notes about the Arare tree (Calotropis procera) which I found interesteing:.

« How Beautiful
Walking the Path »