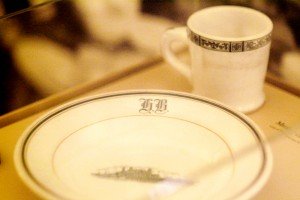 “Several years ago, I heard a story about a Scotsman who was coming to America.  He had purchased passage on one of the great ocean liners.  He did not have much money, so he decided to save on food by stocking up on crackers, cheese, and fruit before he left.  The ship sailed, and he began to eat his spartan meals.  This went fairly well for the first four or five days.  But as the ship drew closer to New York the crackers got stale, the cheese became moldy, and the fruit spoiled.  Finally there was nothing left that was fit to eat.  The Scotsman decided that he would go to the dining room and have one good meal before the ship docked and he went ashore.

Imagine his surprise to discover that nothing in the dining room cost anything, and that all that he could ever have eaten had already been included in the price of his ticket before he left the British Isles!”

— The Gospel of John by James M. Boice

Isn’t this often true of the poverty of life in which we live by not realizing that Jesus has already paid with His life for blessings to us beyond our ability to count?  “Like an ignorant child who wants to go on making mud pies in a slum because he cannot imagine what is meant by the offer of a holiday at the sea” (C.S. Lewis).  I pray that we will all join each other today and this week at the banquet table of blessings He has prepared for us.