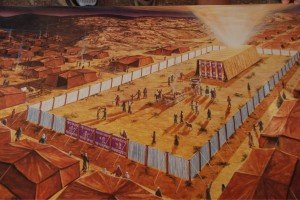 The saying, “we have met the enemy and it is us!” is certainly an appropriate saying and one I was reminded of as I studied Beth Moore’s tabernacle series recently. We were studying the Israelites as they camped around the tabernacle. The Hebrew word for camp is “machaneh” which means army, band, company, or station, and was a military term. Out in the wilderness, God had assembled an army and was leading them as their commander, but there was no enemy on the outside in sight. Instead, the Israelites faced the most vicious enemy of all – themselves! They were in a constant battle against their flesh .Their wants and desires from living in Egypt had corrupted them immensely. It took 40 years in the wilderness to get Egypt, out of them. This led me to the following faith lesson about”ourselves” as our enemy:

As we go through the trials of life, we are tempted to label most of our problems as spiritual warfare. We feel that Satan is constantly out to get us and is placing roadblocks and rocks in our path. “I’m under attack” is our cry, and every difficulty is labeled spiritual warfare. To be sure, we do fight Satan and his demons, but we often war against an equally sinister foe, our flesh! Noted Christian author , Henry Blackaby ,has said, “Before we can be sure it’s spiritual warfare, we must be able to answer the following three questions and be sure the answer is no to each of them. If it’s no, then Satan is after us, if yes, we are fighting are fleshly desires. Look at these questions:

Far too often our difficulties originate from one of these three realms instead of a Satanic attack.

Beth Moore said that people often ask her, because of her prominent role as a spokeswoman for God, if she is under continuous attack from Satan. She responds to them,” my own flesh is twice the enemy to me that Satan is”! She goes on to say, we know how to rebuke Satan because we hate him so, but on the other hand, we won’t rebuke our own flesh, because we love it so much. We have far more difficulty rebuking our own flesh and squelching our own desires.

Wasn’t this what Paul was talking about in Romans 7:14 – 25 – when he says” what I want to do, I don’t do, and what I don’t want to do, I do. When I want to do good, evil is right there with me, fighting against me.” Like the Israelites, our greatest battles are within ourselves, warring with our minds, our thoughts, and are fleshly desires.

Clearly, the mind is the largest battlefield in our struggles with the flesh.

How do we keep from losing the battle and being subject to defeat?

First and foremost, we must camp and stay close to our commander. The promise found in Deuteronomy 23:14 is awesome and something I hadn’t seen before. If we choose to camp and walk closely with Him, He will protect us and deliver our enemies to us. But our camp, our lives, minds, families (fill in the blank) must be holy and he must not see anything indecent among us or he will turn away. It is a necessary challenge of this life that we must take – to have a holy, godly separated life. We can’t delve into sin and expect God to protect us.

Secondly, we have a promise from II Corinthians 10:3 – 5. Though we live in the flesh, the weapons we fight the flesh with are not carnal, not the weapons that worldly people have to use, no self-help for us! Our weapons are spiritual, and can pull down strongholds, if we will take every thought captive to make it obedient to Christ.

Hezekiah said, when faced with extermination by Sennacherib, “Don’t be afraid of the king of Assyria and the vast army with him, for with him is only the arm of flesh. With us is the Lord our God to help us and to fight our battles for us.”

God will protect and deliver us if we get our camp cleaned up and holy. We can avoid a lot of our problems just by surrendering our minds to Christ and walking closely with him and by living a separated ,holy life. My thoughts to myself for the day – a lot to work on.

4 thoughts on “Battle with the Enemy”