“If it be so, our God whom we serve is able to deliver us from the burning fiery furnace, and he will deliver us out of thine hand, O king.
But if not, be it known unto thee, O king, that we will not serve thy gods, nor worship the golden image which thou hast set up.”
– Daniel 3:17-18 (KJV) 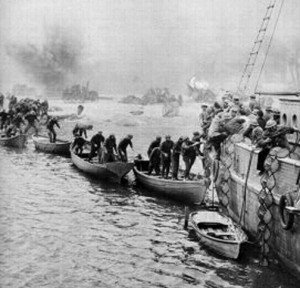 In 1940, in the early part of World War II, the German forces were inflicting heavy casualties on the Allied Forces of Britain and France. As the powerful Nazi troops swept across Europe, the 350,000 soldiers of the Allied Army were forced to retreat. Finally they ran out of space to retreat and were trapped on a beach, against the sea, across the English Channel at Dunkirk, France. The German troops had the Allied Army completely surrounded with the sea at their backs, much like the Israelites when Pharaoh had them pinned against the Red Sea. The German Air Force dropped leaflets on the British Forces telling them to surrender and that there was no hope of escape.

All of England knew of the plight of their soldiers and were awaiting news of the almost certain annihilation of the 350,00 brave men. Late in the night of May 25, a simple three word cryptic message was transmitted across the airwaves of England from the commander of the British Army at Dunkirk. The message was, “But-If-Not”. In a matter of hours, without any formal organization, thousands of English citizens got in their private boats and began heading across the English Channel towards their trapped soldiers. The boats were of every kind imaginable; from small fishing boats, trawlers, larger private boats, and even an Olympic racing yacht. At the risk of their own lives from the dangerous waters and certain enemy fire, they raced to the beaches of Dunkirk and began evacuating the weary soldiers. By the next day all the troops had been rescued in what historians now call the “Miracle at Dunkirk”. 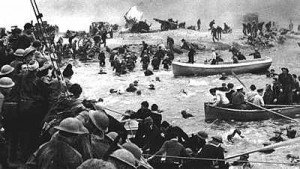 What did these three words mean and how did the Brits all know what their significance was to act so collectively and decisively? Those three words came from the book of Daniel in the Hebrew or Old Testament. King Nebuchadnezzar was going to throw the the three Hebrew Children into the fiery furnace and they replied to the king by saying, “Our God will save us, But-If-Not , we still won’t bow down to the Gods that you have tried to make us serve”. The Brits all knew their Bible! It was estimated that 80% of them knew that slogan and what it meant. They knew that their beloved soldiers would fight to the end and not give in to the Germans but were calling on their God to deliver them. The citizens were all collectively inspired to hear their cry and respond in the only way they knew to save them. Just as Moses cried out to God to spare them from the Egyptians, the English Commander called on the God of the Bible to deliver them also. Once again, from the Sea, God rescued his people in distress. Because the knowledge of these Biblical stories was in the English conscience, they were able to participate in one of the greatest miracles of the war.

That was 1940. Seventy years later, what about us here in America? Would our populace (or Britain) know the word well enough to respond in a similar fashion? Most Americans don’t know their Bible at all. School children don’t know who Job is or if Abraham came before Jesus or any of the familiar stories of the Bible. They have never even heard them. Christianity is no longer a languages that is universally used. Statements such as, ”Patience of Job”, ”She’s a Jezebel”, “Wise as Solomon”, ”Strong as Samson”, “David vs. Goliath” and many others are not known or used anymore. As much as we don’t like to admit it, we are not a Christian nation like we used to be. Hosea 4:6 says,”My people are destroyed for a lack of knowledge”. Our nation was founded as a Christian nation and dependent upon the God of the Bible to protect and prosper us. Our prayers and actions need to be devoted to returning us to this dependence upon our Creator. But-If-Not, we are doomed to failure as a nation.

6 thoughts on “But If Not – The Miracle of Dunkirk”