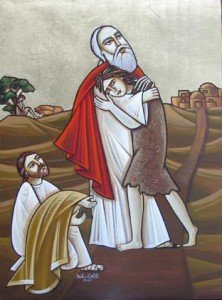 To conclude our study of the stories found in Luke 15 we must now go back to the beginning and summarize what we have learned. As was stated in our introduction, for hundreds of years the Latin tradition has called this parable, “Evangelium in Evangelio“ (the gospel within the gospel) and we have learned that the tradition is wonderfully accurate. But to discover that truth we had to do a lot of digging and searching similar to what archaeologists would have done as they dug through one of the ancient tels. We explored each part of the parable in detail and by doing that we solved some problems that just a casual reading would present. We broke the parable into four segments, ”The Request for the Inheritance”, “The Far Country”, “Return Home”, and the “Banquet and the Older Son”, and looked at each segment carefully. This let us dig up some wonderful new avenues and thoughts that we had probably never noticed before with just a normal reading. Let’s summarize each section and attempt to tie it all together.

When the young man asked to receive his inheritance early while his father was still alive, he was in effect saying in that Middle Eastern Culture, “I cannot wait for you to die.” This request would have greatly humiliated the father and he would have been expected to vehemently refuse this brash request. Instead, the father grants his son’s request. The reader now knows that this is no ordinary earthly father and realizes that something bigger is taking place. The father must be like what God would be! The son severs the relationship with this wonderful father and cashes in his chips and takes off to a far country to do it “his way.”

When his son arrives in the far country, he quickly loses all his inheritance by making poor decisions. He has to go to work for a Gentile feeding his pigs just to survive. The story is telling us in an obvious Jewish manner that he has gone as far away from his family and God as he can possibly get. He realized that his only hope of survival was to get back to his father, so he came up with a plan to try to get back into his good graces. If he can just come up with the right words, maybe his father will take him back. He was trying to keep the law by working his way back to salvation into the good graces of his father and the family.

The turning point in the story comes when the son appears at the edge of his village. His father has been waiting for him all this time to come home. He has been watching day and night. He runs out to meet his wayward child at the edge of the village and falls on his neck and begins to kiss his lost son. He didn’t wait to see what the son had to say for himself. He freely offered his grace first. The father’s grace was sufficient to redeem the son from his lost condition. No payment was required from the son!

The father then orders a huge banquet to celebrate the fact that his son was lost and now is found. The banquet was like the Lord’s Supper in that as sinners we are invited to have fellowship with the Father, who demonstrated such costly love to save us. The older son, who is a law-keeper, is mad because he thinks there should be some compensation from the law-breaking younger son. He didn’t have to pay a price for his sins! Grace was offered without the requirements of the law being met. In fact, at the end of the story, grace was offered to both sons, the law-breaker and the law-keeper.

What a picture of the gospel message! Now, you begin to clearly see who the characters in the story represent. Don’t forget who Jesus was speaking to (the Pharisees and the teachers of the law) and why He offered this story. He was responding to their complaints that He was receiving sinners and even eating with them! By telling a story of a father who orders a banquet so that he can sit down and eat with sinners (prodigal), He was obviously talking about Himself as the father figure. The younger son is definitely a metaphor for the tax collectors and sinners (the law breakers) that Jesus was associating with. The older son is definitely meant to be the Pharisees and the teachers of the law because they were the law-keepers. How could Jesus offer the law-breakers a seat at the table with Him? Jesus, as the father, then offers a seat at the table for the law-keeper (older son) also.

Don’t we now have a much clearer picture of what the gospel really is? God is not some grim authoritative patriarch, but a loving father who will do anything to bring us back to Him. We can’t earn our way back; He has paid it all and at a great personal cost! He is constantly looking, taking on the role of a servant, waiting to run to us and freely offer His grace to us. When we accept His grace He then sits down at the table and eats with us to seal that reconciliation. The question remains at the end of the story – will we accept being found? Will we respond to that costly love? Will we sit down at the table of fellowship with Christ? The answer hangs in the balance as the reader has to respond to the invitation in their own heart. “Evangelium in Evangelio” rings loud and clear. This really is the gospel message and it is wonderfully portrayed in this story from the master story teller Himself, our Lord Jesus Christ.

« The Banquet and the Older Son: Part 4 of a Study of the Prodigal Son in Luke 15
Banquet Table of Blessings »

One thought on “Conclusion: Part 5 of a Study of the Prodigal Son in Luke 15”