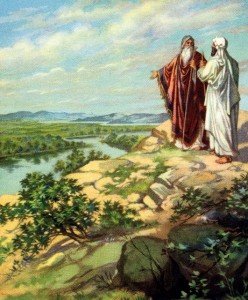 The story of Abraham and Lot separating is a great story that contrasts the life of two men who had choices to make. Abraham made the right choices, while Lot made the wrong ones.  Lot was deceived by appearances and it cost him dearly.

Lot was Abraham’s nephew, and Abraham invited Lot to follow him and help him.  While Lot was with Abraham and served Abraham’s God, he became rich in possessions (see vs. 5&6). When problems arose, Lot and Abraham were forced to make some choices.  Abraham, always generous and the peace maker, gave Lot the opportunity to choose the land he wanted.  Abraham knew he could not obtain wealth except by the Lord’s blessing anyway, so he let Lot have the choice (Gen. 14:22-24).

Lot got greedy, and in his greed, he chose what appeared to be the best land for himself. However, he knew by moving next to Sodom, he was leaving the God of Abraham and it’s blessings and security.  He sacrificed spiritual health for material possessions.  On the surface it seemed as though he had made a good decision. He got the best looking land, the plains along the Jordan River. The land looked green and fertile. Also, he gained position as a leader among the idolatrous people of Sodom, because the Bible tells us that he “sat in the gate” at Sodom which meant he was a judge and one of their important people (Gen. 19:1).

When Lot left Abraham, he not only left the wilderness, where a person had to depend upon God for survival, but he also left Abraham’s God.  This spelled disaster for Lot and his family.  Lot lost everything dear to him, his possessions and  his wife, and then found out that his daughters had become like the incestuous people of Sodom (Gen. 19:30-38). His grandchildren became the Moabites and Ammonites, who were infamous for their idolatry and evil ways.  They were bitter enemies of God’s people from this time forward.  Lot’s bad choices spawned generations of wicked results.

How does Lot’s situation apply to us? Satan paints a wonderful picture of the outside of our culture.  It looks desirable and healthy and “everyone is doing it”.  It is so easy to get caught up in the desire for wealth, material possessions and sexual attractions that look so great on the outside. We are constantly tempted to make the wrong choices.  Satan can’t wait to draw you in behind the curtain.  Once he gets you hooked, then you realize how sickening your choices were.

Abraham refused to compromise and continued to count on God for all his needs.  He made all his choices according to God’s standards.  Read Gen. 13:14-18 again. God blessed Abraham tremendously for his obedience. Don’t be deceived by appearances!!

« Reclaiming the Importance of Scripture
Our Faith Must Be Tough »