In this story about Lazarus, we find an amazing truth about God; He is always just on time, never early, and never late! His timing is always perfect! The rub is – He never shows up quite fast enough when we are in the middle of a problem! We always need Him right now and we are wondering where He is and if He is even going to show up! 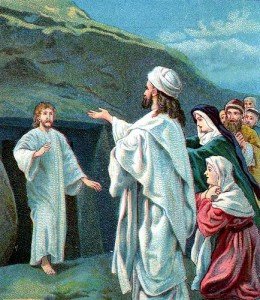 Mary, Martha and Lazarus had been great friends of Jesus. It says that Jesus loved them dearly.  However, when Lazarus was dying, Jesus stayed put, because his Father told Him to. Jesus knew that Lazarus was already dead (vs. 11). God had orchestrated this event so that Jesus would be glorified and the disciples would see something that would sustain them in the tough days ahead. This miracle also initiated a bunch of things that eventually led Jesus to the cross. God’s timing was perfect. But, to Mary and Martha, it was four days late.

Don’t you know that Mary and Martha were anxiously looking out the window, expecting Jesus to show up and save their brother? Don’t you think that they prayed earnestly and expectantly that He would come before it was too late? Don’t you think they were extremely disappointed when their supposed friend, the miracle worker from the Galilee, didn’t show up? He was just a couple of miles away and he didn’t come!

Jesus hurts for us when we are hurting. He was deeply grieved at the pain he knew Mary and Martha were in. But, God had a bigger perspective on the problems that they were going through. God always knows what He is doing, and everything is done according to His plan. That doesn’t keep us from asking and begging God to show up sooner, but often it just doesn’t work out that way. Sometimes God doesn’t make sense to us, but He is still God and knows what is best. He will always show up, but often not in the way or timing that we are hoping for. His eternal perspective is much clearer than our limited look at the problem that we are currently in. The great lessons of this story are that God hurts with us and feels everything that we are going through and He will always show up and work out His perfect will for us. This should motivate us to keep praying and asking God to intervene, even when it seems as nothing is happening. As Dr. Dobson from Focus on the Family often says, “even when nothing’s happening, something’s happening!” Keep leaning on the Rock!

P.S.  I thought you  also would like to hear  a couple of interesting P.S.’s from the story on Lazarus.  There was a practice among the Jews of that time period to put someone in the tomb and not seal it at that time. They would mourn outside the tomb for 3 days, then move the stone and call out the person’s name three times to see if they would answer , and maybe still be alive. If nothing was heard, then you sealed the tomb. When Jesus came, the time was already past, so they would have known that he was dead. 2) The second P.S  is kind  of humorous and occurs just a little bit later in the Jesus story in John 12:9-11. The chief priests, when they saw how popular Jesus was becoming because of the healing of Lazarus, made plans to kill Lazarus as well as Jesus! It’s kind of funny that the guy that Jesus just raised from the dead was somebody they were going to try to put in the grave again!

« Faith in Jesus vs. Faith of Jesus
Call Down Fire from Heaven »