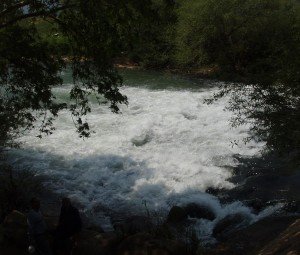 On day 9 of our trip to Israel, we took an early morning hike down to the banks of the Jordan River. The name “Jordan” comes from the Hebrew word that means,”To descend or go down”. The Jordan River is not a big river by American standards, but it is a strong and swift river for its size. From its origin on the slopes of Mt. Hermon (9000′ ft. above sea level), it drops over 900 ft. in the ten miles it takes to get to the Sea of Galilee. Then it flows another 90 miles to the Dead Sea, which is over 1400 ft below sea level. This makes it one of the fastest flowing and descending rivers in the world. The Jordan is the most frequently mentioned geographical feature in the Bible, occurring 181 times in the Old Testament and 32 times in the New Testament. Two very significant biblical events occurred here, the crossing of the Jordan by the Israelites into the Promised Land, and Jesus baptism in the Jordan by John the Baptizer in the New Testament.

Water, to a biblical character, was not the same as it is to people today. Water was scarce in these desert lands and there was never enough to swim in or to be comfortable being around. Water, to these desert people, was a barrier to be crossed and an obstacle to overcome. The Israelites believed that the Devil lived in the abyss, in the bottom of the lake. They were afraid of the water and what it represented in their world. When the Israelites reached the banks of the Jordan, they were facing an almost insurmountable obstacle. The Bible says the Jordan was at flood stage and in this particular area the banks are very tall and steep. To complicate matters, none of the Israelites could swim. They were standing at the brink of something great that God had promised them, but they had a huge barrier to overcome to receive that promise.

In Chapter 1 of Joshua, God encouraged the leadership and the people to,”Be Strong and Courageous”! “Even though you haven’t been this way before, I have and I know the way”! God was asking them to trust Him to take them to a place that they were afraid to go on their own. Now, can you picture the Priest and Levites with the Ark of the Covenant, standing on the edge of the steep banks, looking down at the flood stage waters of the Jordan? When does the Bible say that the river divided? When they took the plunge! God required them to have “wet feet”! They had to slide down the bank and get into the river, where they couldn’t swim before God would divide the water.

How does this apply to us and our walk of faith? We often have a sense that God is calling us to do something that is beyond our comfort zone. We don’t like the unknown. We want God to open all the doors, show us the path and then place plenty of road signs along the way to assure us. Otherwise, we are afraid to go. This Bible story shows us that we often have to just “go for it’ and take the plunge! God won’t act until you jump in! He needs to see if you will trust Him to take you to a place that you haven’t been before. If not, don’t expect God to divide any rivers in your life! Go For It! I’m Diving In, sink or swim, I’m Diving In!

2 thoughts on “Don’t Hold Back! A Story at the Jordan River”