The Lord said to Moses, “Say to the Israelites: ‘On the fifteenth day of the seventh month the Lord’s Festival of Tabernacles begins, and it lasts for seven days. The first day is a sacred assembly; do no regular work. For seven days present food offerings to the Lord, and on the eighth day hold a sacred assembly and present a food offering to the Lord. It is the closing special assembly; do no regular work.

(“‘These are the Lord’s appointed festivals, which you are to proclaim as sacred assemblies for bringing food offerings to the Lord—the burnt offerings and grain offerings, sacrifices and drink offerings required for each day. These offerings are in addition to those for the Lord’s Sabbaths and in addition to your gifts and whatever you have vowed and all the freewill offerings you give to the Lord.)

“‘So beginning with the fifteenth day of the seventh month, after you have gathered the crops of the land, celebrate the festival to the Lord for seven days; the first day is a day of sabbath rest, and the eighth day also is a day of sabbath rest. On the first day you are to take branches from luxuriant trees—from palms, willows and other leafy trees—and rejoice before the Lord your God for seven days. Celebrate this as a festival to the Lord for seven days each year. This is to be a lasting ordinance for the generations to come; celebrate it in the seventh month. Live in temporary shelters for seven days: All native-born Israelites are to live in such shelters so your descendants will know that I had the Israelites live in temporary shelters when I brought them out of Egypt. I am the Lord your God.’”
– Leviticus 23:33-44 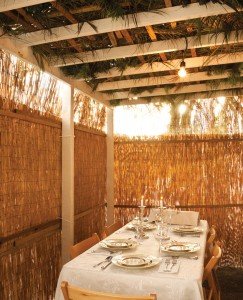 Sukkot (also called the Feast of Tabernacles or Feast of Booths) is a holiday set up by God in Leviticus 23:33-44. It is one of the three holidays that God told the Israelites they must attend in Jerusalem each year (the other two are Passover and Pentecost). This holiday is celebrated for seven days (or eight in some areas) starting on the fifteenth day of the seventh month in the Jewish calendar. This year on the Christian calendar, it began on September 19 and was over on the 25th. Sukkot follows five days after the holiday of Yom Kippur that we looked at in our last post.

In contrast to Yom Kippur, Sukkot is a very joyous occasion. For the Jew, it is quite a drastic transition from the most solemn day of the the year to the most joyous. The seven days of Sukkot are an exciting, fun-filled festival often called the “Season of Rejoicing”.

The name, “Sukkot” (suka – singular) means “booths” and refers to the temporary structures that God told the Israelites to build and live in for seven days to remind them of His provision for them while they were in the wilderness for forty years. The Hebrew word for tabernacle (mishkan) means a temporary dwelling, hence the alternate name Feast of Tabernacles or Booths. The Israelites were instructed to build their temporary booths with an open roof so that you could see the moon and stars at night. This outdoor experience would remind you of God’s bigness and His provision for the Israelites while they lived in the wilderness.

For the modern participant in Sukkot, it is a fun-filled seven days. Even though many Israelites today live in high rise apartments, they still build small makeshift booths on their patios or where any small space is available. Some companies even offer Sukkot kits that you can put together for your home. These booths are decorated with lights and fruits and vegetables and children’s artwork. Families camp out in the backyard and eat their meals in them and often take turns sleeping in the booths at night. The festival has a similar look and feel to our Christmas. On the first day of the Festival, work is forbidden and is a Sabbath like holiday. On each day of the seven day holiday, special blessings are recited over four species of plants that God required them to have in their possession. The etrog (similar to a lemon), a palm branch called lulav, two willow branches, and three myrtle branches are all required in the booth. These four species are held and waved before the Lord as the blessings are recited.

The precepts found in the Feast of Sukkot are very similar to our American Thanksgiving. Many historians think that the American pilgrims borrowed this idea from the Bible when they set up the first Thanksgiving Feast. They were trying to find a way to express their thanks to God for letting them survive the winter and giving them their first harvest. They looked to the Bible to show how to best express that gratitude and copied the instructions of the Feast of Sukkot .

The Bible contains several stories that involved the Feast of Sukkot and the historical significance of these events had a big effect on how Sukkot was celebrated later in Jewish history. In our next post, we will look at several of these,”Sukkot” events.

« Yom Kippur and the Days of Awe
Feast of Sukkot: Part 2 »

One thought on “Feast of Sukkot: Part 1”