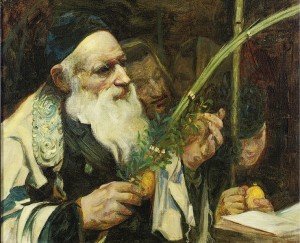 In our first lesson on the Biblical Feast of Sukkot, we looked at how God instructed the Israelites to observe this holiday that He ordained.  Also, we looked at when and how it is celebrated today by Jews all over the world. In today’s post we will look at how the Feast of Sukkot played into Jewish history.  Over the years, three historical events added a lot of emphasis and meaning to the Jewish perception of the Feast of Sukkot.  These three events gave a strong national identity to Sukkot and gave the Israelites a special sense of pride and fervor each time it was celebrated.

The first event occurred during the reign of Solomon when he chose the Feast of Sukkot as the time that he would dedicate the first temple to God. This event occurs in 1 Kings 8:2 and 2 Chronicles 5:2-3. The temple had actually been completed eleven months earlier (1 Kings 6:38) but Solomon waited to dedicate the temple on Sukkot to emphasize the fact that He had preserved them in the wilderness and brought them to their new, permanent home. During the dedication, God showed up in a big way:

God had come to permanently tabernacle (dwell) with His people.

The second event occurred during a much more dismal time period for the Israelites. Approximately four hundred years after Solomon dedicated the original temple, it was destroyed by Babylon in 586 B.C. For over one hundred years the temple lay in ruins until the time when Ezra, Nehemiah, and Zerubabel began to rebuild the city of Jerusalem and its temple. They began living permanently in Israel during the seventh month (Nehemiah 7:73b). Then in Nehemiah 8:13-17, these men re-birthed the Feast of Sukkot:

On the second day of the month, the heads of all the families, along with the priests and the Levites, gathered around Ezra the teacher to give attention to the words of the Law. They found written in the Law, which the Lord had commanded through Moses, that the Israelites were to live in temporary shelters during the festival of the seventh month and that they should proclaim this word and spread it throughout their towns and in Jerusalem: “Go out into the hill country and bring back branches from olive and wild olive trees, and from myrtles, palms and shade trees, to make temporary shelters”—as it is written.

So the people went out and brought back branches and built themselves temporary shelters on their own roofs, in their courtyards, in the courts of the house of God and in the square by the Water Gate and the one by the Gate of Ephraim. The whole company that had returned from exile built temporary shelters and lived in them. From the days of Joshua son of Nun until that day, the Israelites had not celebrated it like this. And their joy was very great.

From the Text we know that their joy was very great and from this point on the Feast took on an even more important place in Jewish hearts. God had let them reestablish their identity that was so powerful during the time of Solomon.

The third historical event occurred between the time of the two testaments, during the Macabbean revolt. Under the thumb of the Greeks and not allowed to use their temple, circumcise their boys, or even own a copy of Torah, the Jews finally revolted to overthrow the Greeks. This revolt lasted seven years and when they were finally victorious, their leader, Judah Macabee, ordered an eight day celebration to commemorate the fact that they had missed the Feast of Sukkot during the revolt. This holiday is known today as Hanukkah, or the Festival of Lights, and celebrates God giving His people their temple back and once again establishing them as a free nation.

These three events, taking place over one thousand years, added a lot of tradition and importance to the Sukkot Festival and it became much like the American Independence Day celebration held annually on the 4th of July.

A fourth event that developed over the years – not as a direct order from God, but as a tradition – was the waving of the “lulav”. God told the returning Israelites in Nehemiah 8:13-18, to put the branches of three types of trees (palm, myrtle, olive) on the roofs of their booths.  The tradition developed over the years of wrapping the olive and myrtle branches around a large palm frond to make a long standard or flagpole of sorts.  During the Feast of Sukkot, every worshiper at the temple waved these “flags” around much like Americans do on July 4th.  On the last day of the Feast, the worshipers were supposed to beat the ground with the branches until all the leaves came off – with lots of noise and intensity, like American fireworks.  Can you imagine the noise and commotion that half a million or more people would make following this procedure?

While waving and beating the “lulavs”, the assembled worshipers would chant Psalm 113-118, called the “Hallel”. A look at these Psalms shows you that they say everything that is great and awesome about God. The word, “Hallel”, translated in English as “praise”, is a middle eastern word. It’s root is a sound that middle eastern women make in extreme emotion – a shrieking, rolling of the tongue. When you hear them do it on television, it is a sound you don’t forget.  Hallel to God is Hallel Yhwh, or as we say, Hallelujah. However, they don’t say it like we do; it comes out with great emotion: Hallel to Yhwh! If your look at Psalm 113 it begins with Hallel-u-Yah – or “Praise the Lord”. The crowd would continue chanting through each psalm with emotion and voices rising and coming to a climax when they got to Psalm 118:25. This verse was the key verse and heart of the Hallel. “O Lord, save us, deliver us, save us! O lord grant us success, or make us fruitful, make us worthwhile, make us significant!” By the way, “save us” did not mean “salvation”, but had to do with a call for rain; as in “send us rain”. It’s interesting to note that rain and salvation are always connected because rain is so life-giving and necessary for survival. Picture hundreds of thousands of Jews, waving the lulavs, and shouting the Hallel in a shrieking, emotional voice.

All of this historical background sets the stage for an awesome New Testament Story that happened during Sukkot. That will be the topic of our next post on this fascinating subject.