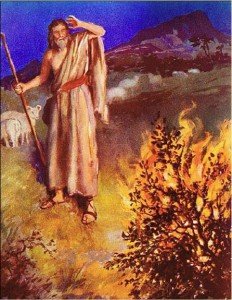 I wanted to look closer at the events surrounding the burning bush to learn more about Moses and what qualified him to become such a good leader.

To recap, Moses is in the Midian desert by Horeb, which means barren or dry, and is the name for the general area of Sinai, where Mount Sinai is. He sees the bush on fire and goes over to investigate because it is burning, but does not burn up — a consuming fire, that didn’t consume. God calls his name twice — which we’ve already discussed, saying that God had a big job for Moses.

Moses took off his sandals at God’s request, and Moses was afraid even to look. God says “I have seen the suffering (tseqah) of my people in Egypt”. Moses probably thought. “It’s about time — yes!” Then God says “I’m going to come down and rescue them and bring them out to a new land”. Again, Moses probably said, “right on! It’s about time! Get them out of there!”

Then God drops the bombshell, “I am sending you to bring my people out of Egypt”. It suddenly dawns on Moses that this huge task is going to be laid on him and you could certainly understand why he wouldn’t feel qualified. “Who am I that I should go to Pharaoh?” Why me?

At this point, you would have expected God to list all of Moses’ qualifications:

Moses had good qualifications. But God didn’t talk about qualifications; he simply said “I’ll be with you.” Great leaders always have the qualifications, but that doesn’t make them a great leader. Leading like God does is what much makes them great. Moses becomes one of the greatest leaders in history because he always had the interests of God’s people at heart. Moses wasn’t the perfect leader, as we are seeing in Numbers. But, Deuteronomy 18:17-20 says that there would be another leader coming who would take it to the perfect level. Jesus would take Moses’ pattern of servant hood to an even greater level. Moses in his great, but imperfect way, will show us why there needs to be a second Moses.

Moses, as the great leader of the Exodus, set a pattern of leadership that Jesus would follow later. Even as a little boy, Jesus was taught to be like Moses. Be a servant, be a good shepherd. Moses was the first shepherd of God’s people and Jesus called himself the good Shepherd.

Later, after the golden calf incident, God is ready to destroy his people and start over. Moses pleads with God to take his life instead. Exodus 32:32 – “But now, please forgive their sin-but if not, then blot me out of the book you have written.” Isn’t this exactly what the second Moses would do later? Moses pled for their lives and Jesus bled for their lives. His pattern came from the example and words of Moses.

When God put Moses in the cleft of the rock and let him see his glory, the first thing that came out was God’s mercy and compassion. Another Moses showed the same qualities. Oh, he had the power, but Jesus wanted to be known as someone who healed lepers and made the blind to see and the lame to walk.

In summary, great leaders have servant’s hearts and have love and compassion above all. Power and politics don’t change the world, but love and compassion do. Feed the hungry, visit the prisoners, heal the sick, clothe the naked, and that will change the world. Moses set the first and best example of what a leader should be. God spoke with Moses, face to face and told him, he was pleased with him. In Matthew 9:36, the writer, speaking of Jesus, says,” When he saw the crowds he had compassion on them, because they were harassed and helpless, like sheep without a shepherd.” Moses was the first shepherd; Jesus was the good and ultimate Shepherd and our model for a great leader. Amen and Amen.

« Between the Stones
Meditation – A New Perspective »

3 thoughts on “From the Burning Bush to the Cross: Making of a Leader”