How did God begin the process of rescuing his people?  He picked a partner to start the process!  Why in the world does God need a human partner?  Why does He so often seem to pick someone to be His hands and feet and voice?  Throughout human history He has done this.  Abraham and Sarah, David, Ruth – you could go on and on – and then He picked Jesus.  And then Jesus chose disciples, common men all.  To save His people, God chose Moses, which was an interesting choice.  Let’s take a closer look at what God did to get His partner ready to lead his people out.

We first meet Moses as an infant.  God puts him in and saves him with an ark (tebah), just like He did to a remnant in the past to start over.  He gives him a name that would be his destiny; in Hebrew, his name means “to draw out”.  God also places him in a unique position in his adopted family, as a man who would possibly be in line one day to be the next Pharaoh of Egypt.

He also evidently gave Moses a unique heritage.  Evidently, there were a few Israelites who still knew of and clung to the God of Abraham.  Moses’ parent’s names, give us a clue to their beliefs.  They are Jewish names, and Amram means “exalted people” and Jochabed means “give glory to Adonai”.  This gives us some idea of where Moses got his heart.  He must have had godly parents and grandparents. 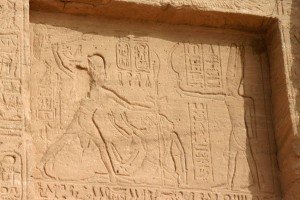 How do we meet Moses as an adult?  He kills an Egyptian!  As a man, Moses had God’s heart – he had intense sympathy and compassion.  He was a man who would hear the cry of someone who was hurting and would come to their rescue.  In the Egyptian world, the stick represented the power that the Pharaoh wielded over anyone one that crossed him.  Image after image depicts him with a raised stick over his subdued enemies.  Moses acts like Pharaoh and hits with a stick.  He has to run away, he is an enemy of the Crown.

God says, I’ll teach you to lead like me, not like Pharaoh.  So He sends Moses to the desert to tend a flock of sheep for 40 years.  All God’s partners have to be trained.  Then, after 40 years, God shows up in a bush and says, “Are you ready to tackle the mission I’ve given you?”

If you will notice in Exodus 7, that God didn’t just give the message to send, He told Moses, “you be the message”.  “I will make you like God to Pharaoh”.   1 Peter 2:5 carries that same message, you, too will be a kingdom of priests.  We are supposed to show the world what God is like.  God is still looking for partners.  Are you interested in being one of them?  Are you willing to trade your cushy lifestyle for 40 years of desert training?

Moses was a humble man going up against the most powerful megalomaniac in the world.  Doesn’t make sense!  Moses was able to hear the cry!  Do you hear it?  Or do you cover up, you and your children’s ears?  We have to learn to have God’s heart and God’s ears.  In the New Testament there are nine examples of Jesus doing something dramatic when people cry out.

« Kingdom of Heaven Begins
Spaghetti: The Bible Is One Long Thread »