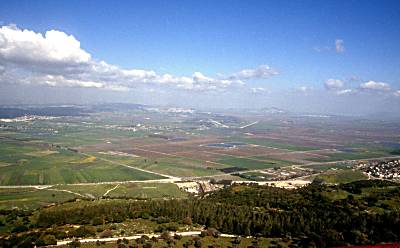 Our climb to the top of Mt. Carmel on the first day of our trip to Israel was a difficult one. It is a very steep mountain and takes a lot of effort to make the 4 mile climb to the top. Mt. Carmel rises abruptly out of the plain of Jezreel and is the most prominent landmark in that whole part of Israel. Once you get to the top of the mountain you have a breathtaking view of the Jezreel Valley and beyond. You can see the town of Nazareth, where Jesus grew up, across the valley. The Kishon River, which plays prominently in the story of Deborah and Barak and also in the Elijah story, is very visible as it snakes its way through the valley on its way to the Mediterranean. In the distance you can see the prominent landmarks of Mt. Gilboa, Mt. Moreh and Mt. Tabor. All these mountains have biblical stories associated with them. The ancient city of Megiddo sits at the eastern base of the Carmel Mountains, and this whole area is frequently called the Valley of Armageddon by Bible scholars. As you can tell from all the well known biblical names, this area is full of stories and imagery from the Bible.

One of the stories we discussed, the story of Deborah and Barak that occurs in Judges 4 and 5, had some interesting ” I bet you didn’t knows” that make the story a lot more intriguing. The part of the story that the typical western reader would miss occurs in the names of the characters that are involved. “Deborah” means, “Honey Bee” or “Honey”. What does God taste like? Honey!  Deborah definitely represents good in this battle between good and evil. “Barak” means “thunder and lightning”, “Boom”, “Powerful”! However, in the story, he didn’t really live up to his name. He told Deborah, “I’m not going into battle unless you go with me’! I’m scared!” Barak wasn’t a whole lot of thunder if he wouldn’t go to war unless a woman went ahead of him! The general for Jabin’s army was a man named Sisera. “Sisera” means “snake”. Who is a snake? The devil! Sisera and Jabin are the devil and represent evil in this story. What happens to Sisera (the devil) in this story?  The woman, who killed Sisera, killed him by striking his head. If you go back to the Genesis story of the battle between Satan and God, it says that we will strike the devil’s head and he our heel. To an eastern thinker, this story was not just a battle between Deborah and Barak and Jabin and Sisera, but a much bigger battle between the forces of good and evil. God triumphed over the Devil in this battle through these early Bible characters. This story, as in many cases in the Bible, means a lot more once you know all the details. It turns out that there was a lot more here than originally met the eye!

« Jesus Cursing the Fig Tree & Other Tree Lessons
Not by Might, Not by Power: A Study at Gamla, Home of the Zealots »

5 thoughts on “Honey Bee and the Snake”