Most people who visit the country of Turkey make it a point to go to the fabulous ruins of the seaport and biblical city of Ephesus. However, not many tourists make the fifty mile trip south of Ephesus to visit another biblical city, the ancient port city of Miletus. Paul was here, as found in Acts 20 and also 2 Timothy 4:20. Paul sent for all the elders of the church in Ephesus to meet him in Miletus. This was at the end of Paul’s 3rd missionary journey. Paul had spent several years in Ephesus and been through lots of trials and difficulties with the believers there. He realized that he was about to be imprisoned and that he would never see these people that he loved, again.

When the leaders arrived, Paul began to speak to them in Acts 20:18 and tell them that he has done his best to teach them and that he has nothing to be ashamed of and that he has given them everything that he had. Paul was saying that he had left it all on the field and he had no regrets. Because Paul was a well versed student of the Hebrew Testament, he knew the story in Ezekiel 3:17-19 where God had warned his prophets, ”you tell them and if they don’t listen, it’s their fault. If you don’t tell them and warn them, then it’s your fault; their blood is on your hands”. Evidently, drawing from this passage, Paul tells the leaders of Ephesus, “I am innocent of the blood of all men”. He had boldly proclaimed the gospel to everyone that he had come in contact with. He had warned everyone in Ephesus and the surrounding area. In fact, Acts 19:10 says, concerning Paul’s preaching, ”This went on for two years,so that all the Jews and Greeks who lived in the province of Asia heard the word of the Lord”. 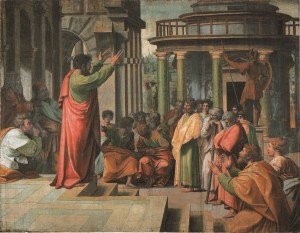 « What Are You Doing Here?
The Acropolis at Priene »

2 thoughts on “Innocent of the Blood of All Men”