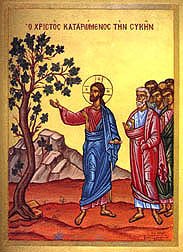 On the first day of our trip to Israel we spent a lot of the day following our rabbi climbing Mt. Carmel. Just as the disciples of our rabbi Jesus did, we listened and learned from him as we walked along the path. As we entered an ancient olive grove, he began to give us some intriguing background information on this interesting story of Jesus cursing the fig tree that is found in two of the gospels.

Because of their size and abundance in Israel, the olive tree was thought of by the Jews as just an ordinary tree that represented ordinary people. Although they were the most important and productive tree in Israel, olive trees are not very tall and don’t create much of a canopy for shade. Almost every family had a grove of these in the family gan (garden). Fig trees however, were a much bigger tree and didn’t occur as often in the natural landscape .They were prized for their large fruit .Their scarceness, large size and shady canopy made the Jews think of the fig tree as the tree of royalty and leadership. If you had a large fig tree, you were shaded, protected and sustained by its presence.

With this background in mind, it is interesting to review the two stories to see how this might have played a part in Jesus actions. In both accounts of Jesus cursing the fig tree he had argued with the leadership either just before or right after withering the tree. To an eastern thinking reader, this was a picture of what Jesus thought of the leadership that he had come into contact with and how he would handle their argumentative nature. To a Jew, it was no coincidence that he cursed a fig tree rather than an olive or some other tree. He was making a point with a scintillating picture to back it up.

An interesting side note is that the two accounts of the same incident differ in what happened to the tree that was cursed. In the Matthew account, they saw the tree immediately wither, whereas in Mark, they came back by the tree the next day and noticed that it was withered. In either case, Jesus made his point to his disciples and bystanders as to what he thought of the corrupt segment of the Jewish leadership.

P.S. Another fact I learned about trees on this walk, was the meaning of the phrase in Isaiah 55:12 that says, “The trees of the field will clap their hands”. This is a reference to the trees yielding their fruit and bearing a bountiful harvest. On that day, when we “shall go out with joy and be lead forth with peace, and the mountains and the hills break forth in singing”, the trees will yield their harvest to you and will produce much fruit. That makes those verses make a lot more sense.

P.S.S. I found this picture online and thought you might get a laugh out of it: 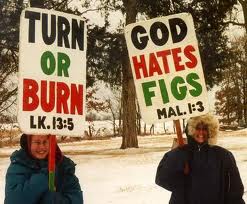 « Tribute to Caesar
Honey Bee and the Snake »

One thought on “Jesus Cursing the Fig Tree & Other Tree Lessons”