(Note: I originally wrote a lesson on this in April of 2010, but after this weekend’s seminar, realized there was another piece to this story that I hadn’t seen. So, here is the updated version.) 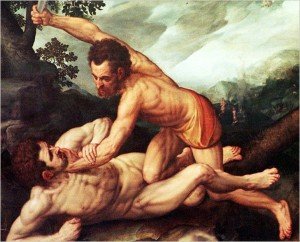 In Matthew 18:21-22, Peter asked Jesus, “Lord, how many time shall I forgive my brother when he sins against me? Up to seven times”? Jesus answered, “I tell you, not seven times, but seventy times seven.”

Why did Jesus pick seventy times seven? Why not just 490 or 78? Was that just an arbitrary number or by using double sevens was he trying to say, infinitely? Or, what about this possibility – was Jesus quoting from an Old Testament text and hinting at something that Peter would have recognized?

The number seven in the Bible and Jewish thought is an important number, and is the number that signifies completeness, as in the seven days of creation. If you read the Genesis story, after Adam and Eve’s fall, starting in chapter four, God begins two bloodlines (Cain and Abel) from this first couple. Out of Adam and Eve these two bloodlines slowly become spiritual bloodlines, one the father of good (Seth through Abel), and the other, the father or evil (Cain). If you count down seven generations in each bloodline, here is what you discover:

Now, remembering that the seven is the number for completeness, look at the person who is the seventh person in the bloodline of each side. In Genesis 5:23-24, it says that Enoch, on Abel’s side, walked with God and was such a man pleasing to God (Hebrew 11:5) that he didn’t die, but God took him to heaven (Enoch and Elijah were the only two men in the Bible to do this). In the Hebrew mind, Enoch was the personification of a truly righteous man. Conversely, the seventh person in the bloodline of Cain (who killed Abel), was Lamech. Lamech was evil personified and boasted in Genesis 4:24, “If Cain is avenged seven times (Genesis 4:15), then Lamech seventy times seven”. Lamech, the most evil man there was, vowed to get even by repaying evil for evil seventy times seven.

If we knew our Hebrew Testament background, suddenly Jesus answer to Peter’s question makes sense. Lamech’s vicious announcement of personal revenge finds its counterpart in Jesus response. Jesus, by hinting at this story that Peter would have been very familiar with, told Peter that you can’t fight evil with evil (Cain’s side) because evil will always win. You need to take the path of Abel’s line and forgive seventy times seven. You have to fight evil, every time it surfaces, with good. There is no limit (seventy times seven) to the times that you should forgive.

There are so many examples in the New Testament where we think Jesus is coming up with these new sayings, when in reality he was just quoting from his Hebrew text. Our problem is that we don’t know the Old Testament well enough to realize that that is what Jesus is doing. He was the greatest teacher who ever lived, not only in the spiritual sense, but as a man like us who studied and memorized the Text. Everything in Jesus’ life and ministry was taken out of the scriptures that he knew so well. We need to start reading our New Testament through a different window and realize how brilliantly the Old Testament is woven through the stories of the New. It is all one story, we just have to find the connections!

« The Games
Jesus Calms the Storm »

One thought on “Jesus Knew the Scriptures (And We Don’t!)”