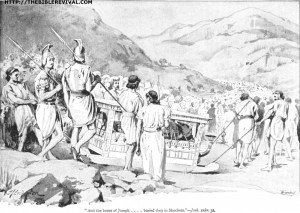 “And the bones of Joseph … buried they in Schechem.”

In the ancient Middle Eastern culture that the Bible takes place in, family was everything. The style of living was a tribal society with a patriarch as the head of each tribe. Your status in life was determined by who your father was and what family, tribe, or clan you were from. The family was a deciding factor in every decision of life. Heritage was very important and everything possible was done to keep your connection to the family members and the family plot of land. A great example of this is the story of Joseph’s bones found first in the Book of Genesis 50:24-25. Joseph, like his father Jacob (Genesis 49:29-32 and Genesis 50:12-14), requested that when he died he did not want his bones left in Egypt, but taken back to his father’s land (Genesis 50:24-25). The Text says that when Joseph died, his body was embalmed (in the Egyptian custom) and was placed in a coffin in Egypt. More than two hundred years would pass after Joseph’s death until the time of the Exodus. At the climax of the ten plagues, the Israelites are released to leave Egypt and head out into the desert for the Promised Land. When the Israelites left Egypt, Moses evidently picked up Joseph’s bones to take with them on the journey (Exodus 13:19). While the rest of the Israelites were plundering the Egyptians, Moses had the foresight to disinter Joseph’s bones out of the coffin and tomb (pyramid) they were in to keep the promise that had been made to Joseph by the family.

Joseph’s bones were not actually buried in the Promised Land until the time of Joshua, 150-200 years later (Joshua 24:32). His bones were finally buried at Shechem on the land that his father Jacob had purchased hundreds of years earlier (Genesis 33:18-20). Shechem then became the center of the tribes of Ephraim and Manasseh, the two sons of Joesph. This would be the place where they would settle and live in the Promised Land.

This interesting story, played out over a 350-400 year period, shows how strong the concept of heritage was in their society. Everything centered around the patriarch of the family and the family land and a tremendous amount of effort went into being able to keep the faith with their forefathers. Because of this diligence, Joseph’s children also settled on the inherited property and the family was held intact for many more generations.

« A Kingdom of Priests
The Gospel »