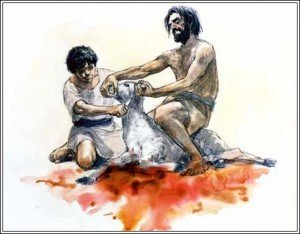 One of the most exciting and faith building lessons that I have ever learned in the Bible came from a study of Jesus’ entry into Jerusalem at the beginning of the week that we call Passion Week. We heard the story as we sat on the Mount of Olives and looked to the west to the Temple Mount and the beautiful city of Jerusalem. The biblical narrative came to life as we imagined the stories in their original setting.

John 12:1 tells us that Jesus arrived in Bethany, a town on the Mount of Olives, on Friday, six days before the Passover. He stayed at the house of Mary, Martha, and Lazarus over the Sabbath. On Sunday, the first day of the week, Jesus left Bethany with his disciples and walked the short distance to Bethpage, another small village located on the slope of the Mount of Olives that faced Jerusalem. At that point Jesus got on a donkey and with his disciples behind him, he began to ride down the Mount of Olives towards the eastern entrances to the city of Jerusalem. The road into the city was extremely crowded that day as hundreds of thousands (if not millions, according to Josephus) of pilgrims were flocking into the city to begin the celebration of the Passover season. The Feast of Passover was the most important Jewish feast of the year and was one of the three pilgrimage feasts (Passover, Pentecost, and Sukkot) that every Jewish male was required to attend in Jerusalem. Jews came from all over the world to attend this celebration. Passover was actually coupled with the Feast of Unleavened Bread and First Fruits, and all were celebrated in succession.

According to Exodus 12:3, on the tenth day of the first month (Nisan), every man was to select a lamb that would be the right size for his household to eat. The lamb had to be a year old male, without blemish or defect. The family would then keep the lamb until the fourteenth day (Exodus 12:6) and then kill and eat the lamb that evening for the Passover Meal. The day that the Israelites picked the lamb for their families was known as Lamb Selection Day. It was a very festive day and would have been similar to us picking just the right size turkey for our Thanksgiving meal later in the week. All the pilgrims were anxiously making their way into the city to pick the lamb from the flocks that the Saducees had bred and raised for this occasion.

On the very day that the entire nation of Israel was picking their special lamb, Jesus rode into Jerusalem to also celebrate Passover with his disciples. By coming into Jerusalem on Lamb Selection Day, Jesus was saying in an unbelievably symbolic way, ”I am going to be your Passover Lamb; the Lamb that will save you. Pick Me! I am going to be sacrificed for the sins of each one of you.”

How did we miss this fact that Jesus came into Jerusalem on Lamb Selection Day? The answer probably lies in the fact that we just don’t know the Old Testament very well and are not familiar with what was involved in the Passover celebration. The lamb was killed on the evening of the 14th, which would have been on Thursday in the story of Jesus’ last week. By counting backwards to the 10th , we see that in fact it was on Sunday that the Israelites would have picked their lamb. This was no coincidence that Jesus came on that day to say, “I am the Passover Lamb”!

The writers of the New Testament certainly got the message. Paul says in 1 Corinthians 5:7, “For Christ, our Passover Lamb has been sacrificed.” Hebrews 7:27 says, “He sacrificed for sins, once for all, when he offered himself”, and Hebrews 9:28, ”Christ was sacrificed to take away the sins of many people.” John the Baptizer said, ”Behold the Lamb of God, who takes away the sin of the world.” Peter, in 1 Peter 1:19 says, ”You were redeemed with the precious blood of Christ, a lamb without blemish or spot.” In the book of Revelation twenty or more times it refers to Christ as the Lamb. Revelation 5:6 says, “Then I saw a lamb, looking as if it had been slain, standing in the center of the throne…”. Revelation 12:11 – ”They overcame by the blood of the Lamb…”

From Genesis (Genesis 22:8 – “God himself will provide a lamb”), to Revelation (Revelation 5:12 – “Worthy is the Lamb, who was slain”), Christ is our Passover Lamb! And, just to make sure we got it, God sent his son into Jerusalem on the very day that the Jewish people had been picking their lamb for the past 1500 years!

What a God of detail and precision! The date and time had been fixed since the foundation of the world and everything was planned down to the last detail! Every dot was connected and every piece of the puzzle fit exactly. Although the crowds had hoped he was coming to be their warrior king, God had a much different battle plan. He sent his son, the King of the Universe, to humbly die as our Passover Lamb to save us from our sins. This is the season of Passover and Lamb Selection Day is here! What an excellent time to thank Him for His sacrifice!