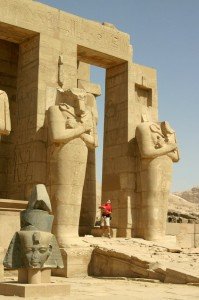 A well known Christian songwriter placed these poetic words from Psalm 24:7-10 in one of her hits songs a few years ago, “Lift up your heads o ye gates, and Lift up your heads ye ancient doors”. What was the Psalmist trying to say from his ancient time period with this beautiful prose? By looking at the ancient Hebrew translation of these words, and by learning a little bit about the pagan religions of that time period, we will see what a wonderful picture the Psalmist was trying to portray about his God, the God of Israel.

When you visit the ruins of ancient Egypt you are amazed at the majesty and splendor of the Egyptian civilization. All these unbelievable pyramids, temples and palaces were built to honor their Egyptian Gods and their Pharaohs. These were huge, impressive structures used to worship their various deities. In every temple erected to honor a god, they would build the gates and doorways for entrance on a very large and massive scale. This was done to make you think, “This must be a huge god that lives in this temple, look how big the door is to get in”! In one ancient temple they even carved huge footprints several feet apart in the floor as if to say, “Look how big and heavy and powerful our god is; here is where he just came into his temple!” The Israelites, before the Exodus, would have lived in the middle of this splendor and would have been very aware of this perception of their Egyptian gods.

The Egyptians were saying, “Our god is so big that it takes this big of a door for him to come in”! You would feel the god’s power as a puny human when you walked through the entrance to his temple and saw the door frame so large and impressive, flanked by enormous statues of the gods themselves.

Now let’s examine the Psalm (song) that David wrote to herald the approach of the “King of Glory”, the God of the Hebrews! The Hebrew word, “rosh“, means lintel, or top, or head, as in head of the gate. The lintel is the piece of the door post that goes across the top of the frame. So to lift up the “rosh”, or the head, was to lift off the lintel or the top of the door, or gate that was the entrance to the temple. The door was already over sized, but our God is so big that we’re going to have to lift the top off of the temple, just so that He can get in! Our God is way too big for these puny temples made by human hands!

Now, let’s read the verse again! “Lift up your heads, o ye gates, lift them up you ancient doors that the King of Glory may come in. Who is this King of Glory? He is the Lord Almighty (YHVH)! Now doesn’t this verse make you want to dance? Take the top off of the Temple! Get out of the way! Our God is huge and mighty, awesome and powerful and He is ready to come in! Who is our God? It’s YHVH, the Lord Almighty, the King of Heaven and Earth!

This theme is carried out in the New Testament by Paul when he stood in Athens, Greece in Acts Chapter 17. As he was looking at all the statues and temples of the Greek and Roman Gods that filled the city, someone must have asked Paul, “Where is your God’s temple?” Paul replied, “The God who made the world and everything in it, is the Lord of Heaven and Earth and he does not live in a temple built with human hands!” And He is not served by human hands, as if he needed anything….” My God is way too big for an ordinary temple like these!

Now don’t these verses just jump off the page and speak in a new and powerful way? Now we can understand what David was saying when he was lifting up this song of praise to His God. Get out of His way! He is coming in power, glory and honor! Every knee will bow and every tongue will confess that He is Lord! What a mighty God we serve!

« Be Strong & Courageous: Hazaq!
Show Me Your Presence »

One thought on “Lift Up Your Heads”