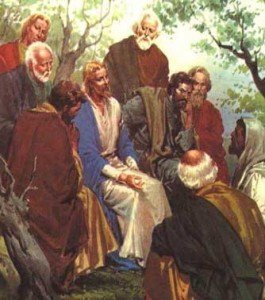 In our opening post we learned that Jesus and His disciples would have prayed three times a day to their Lord in Heaven. During these prayer times, they would have faithfully recited the Shema and a series of eighteen prayers called the Amidah. In light of this, when one of the disciples asked their rabbi Jesus, “teach us to pray”, it wasn’t that they didn’t know any prayers or how to pray. Rather, they were asking Jesus to give them a model of how to pray better, or how to summarize the prayers that they were already saying. We also learned that Jewish Rabbis often taught their disciples summary versions of these daily prayers to illustrate how to use them better in their private prayer time. Jesus did exactly that when he gave the disciples a model of how to pray and what to pray for. The model He gave them was a Jewish prayer from the first words to the last and came out of their daily prayer lives. The Lord’s Prayer is not then a liturgical formula or the only acceptable words in a liturgical prayer. It is at it’s heart a model from Jesus on how to approach His Father and what to pray for when you are desiring to communicate and have a conversation with Him. Let’s now take a further look at that model.

The prayer that Jesus taught His disciples begins with the phrase, “Our Father who is in Heaven” (in Hebrew, “Avinu sh’ba Shamayim”). This reflects Jewish tradition and the Eastern mindset because it says, “Our Father”, instead of “My Father”. Instead of focusing on our individual needs, Jewish prayers emphasize community needs and prayers for the group as a whole. Even when we are praying individually, “Our Father” is still proper because no Christian is praying alone. We are all members of God’s household and are adopted into a distinctive union of God’s people, so that we can say both individually and corporately, “Our Father”.  For further study, see also “Our Father”. It is interesting, in light of His own deity, that Jesus didn’t tell his disciples to pray to Him or to use Him as a mediator to God and call to God in His name.

The Bible assumes the existence of God in heaven and never argues for it. Prayer rests on the premise that the Creator God can hear us when we speak to Him. It is also interesting to note that the name of God, the tetragrammaton or YHVH, was not used in His model prayer and in fact was never used by Jesus. Out of fear and reverence for His name, Jesus and His contemporaries paraphrased God’s name into, ”Our Father”, “The Holy One, Blessed Be He”, “Hashem” (the Name), “Adonai” (Lord), or “Elohim”. God was Jesus’ own father but He had such great respect and reverence for His name that He always inserted “Our Father”, or “ Lord”, and never spoke His name.

The second part of the opening phrase, “Hallowed be your name” (in Hebrew, “ Yitkadeish Shimka”) is a little hard for us to understand since the word Hallowed is not commonly used in today’s English. “May your name be sanctified”, or, “may your name be made Holy”, are better ways to express this statement. This phrase presents somewhat of a paradox, since God’s name is the most holy reality there is. He is the very definition of Holiness. It would be like saying, “May the fire become hot”. God and only God can make His name holy, but it can be defiled by the disobedience of His children. The Holiness of God requires purity and righteousness from His people. Matthew 5:16 says, “let your light so shine among men that they may see your good works and glorify your father which is in heaven”. We keep his name from being defiled and build up his name by living holy and righteous lives.

We have now completed the first phrase of the Lord’s Prayer, “Our Father who is in heaven, Hallowed is your name” and hopefully have a better understanding of what Jesus would have wanted us to think and say when we heard or spoke those lines. We will now turn our attention to the second set of words that are also a little difficult to understand in English, “Thy Kingdom Come, Thy will be done, on earth as it is in heaven”.