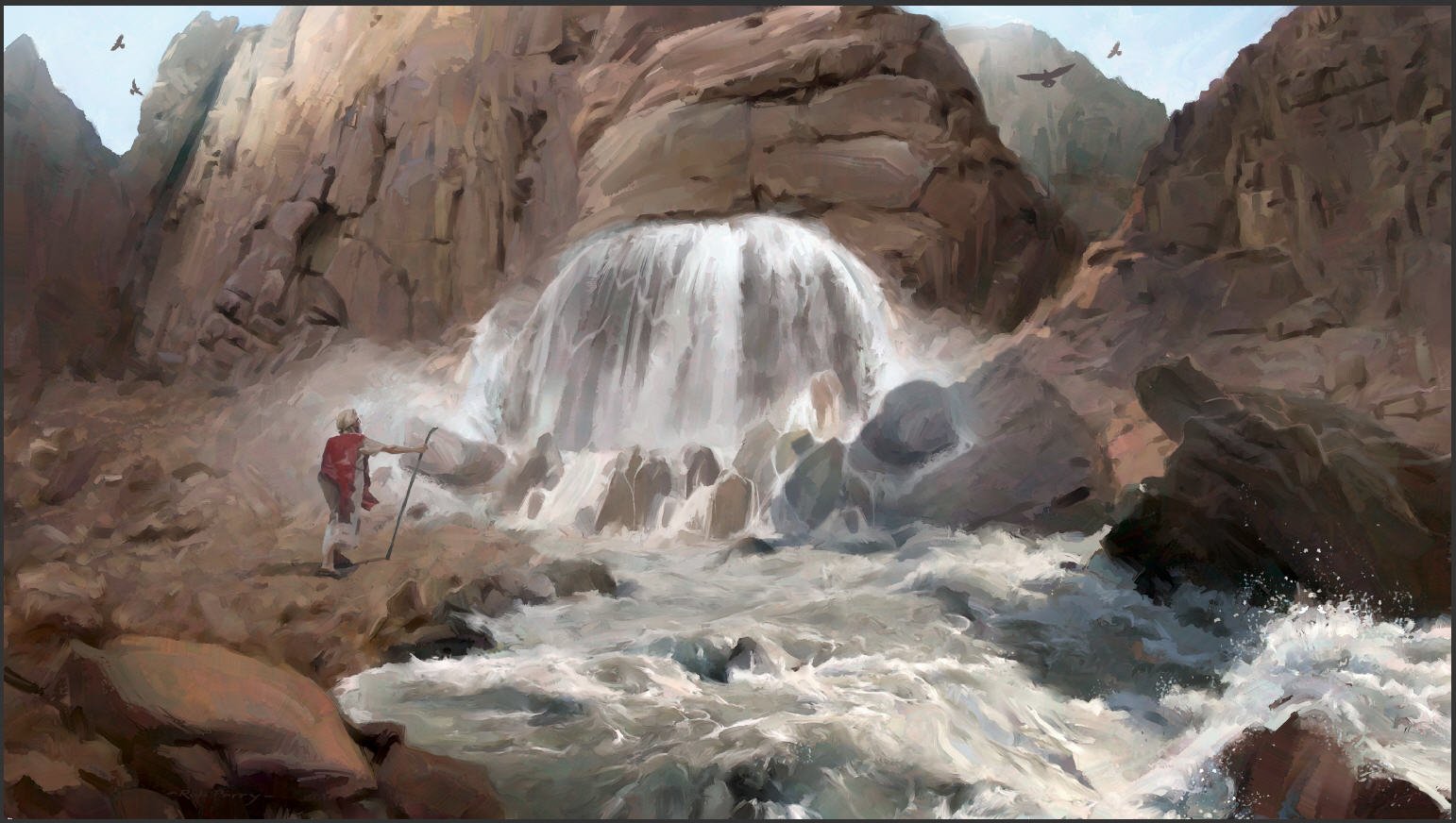 Water from the Rock

The whole Israelite community set out from the Desert of Sin, traveling from place to place as the LORD commanded. They camped at Rephidim, but there was no water for the people to drink. So they quarreled with Moses and said, “Give us water to drink.”
Moses replied, “Why do you quarrel with me? Why do you put the LORD to the test?”

But the people were thirsty for water there, and they grumbled against Moses. They said, “Why did you bring us up out of Egypt to make us and our children and livestock die of thirst?”

Then Moses cried out to the LORD, “What am I to do with these people? They are almost ready to stone me.”

The LORD answered Moses, “Walk on ahead of the people. Take with you some of the elders of Israel and take in your hand the staff with which you struck the Nile, and go. I will stand there before you by the rock at Horeb. Strike the rock, and water will come out of it for the people to drink.” So Moses did this in the sight of the elders of Israel. And he called the place Massah and Meribah because the Israelites quarreled and because they tested the LORD saying, “Is the LORD among us or not?”

I have previously written two lessons on the test at Rephidim so I will try not to duplicate the thoughts here. But, we learned more and more about this third test, so I wanted to write it down.

The Israelites, led by the cloud and pillar, set out from the wilderness of Sin and traveled from place to place. They camped at Rephidim; means “place of rest,” where I’m sure they expected to find water, but there was none. So, they got mad and grumbled (Kaveched) against Moses and said “Give us water to drink”! They had some pretty strong words against Moses and God, here. They stepped over the line into a much more delicate situation because now they are testing God! Unless you give us water, we want out! We don’t believe you, anymore. Vs. 7 says they said “Is the Lord among us or not?” We saw the cloud, we saw what you did in Egypt and the Red Sea and you said you’d go with us,” but now they are saying, we don’t believe you unless you show us! They are telling God, we won’t do our part unless you do yours and they raised their arm against God.

This obviously doesn’t sit well with God, but surprisingly, He doesn’t hit them with a lightning bolt! He has surprising patience with them, and does an amazing thing for them. He sends Moses on ahead to Mt. Sinai, which was probably at least a day’s walk and tells him to hit the mountain of God with his stick. He did not hit just some ordinary rock, he hit the mountain of God, as if God was saying, I’ll take the blow, I’ll take the hit for this one.” I’ll go ahead and send them water. The water ran down the ravine, a day or day and 1/2; back to the Israelite camp.

Some metaphors to apply to this story are:

« Test at Marah
Health & Wealth: The Test We Never Pass »