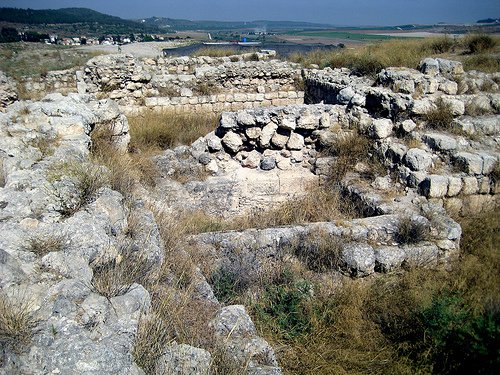 One of the more interesting archaeological sites that you can visit in Israel is the Tel of Bet Shemesh. Bet (House) Shemesh (of the sun) is located in the Shephelah of Israel, which are the low foothills that separate the coastal plain from the mountains. This city site has been almost continuously occupied since the Bronze Age, 5000 B.C.E., both by Canaanites and Israelites. The area around Bet Shemesh was originally given to the tribe of Dan when the Israelites entered the Promised Land. The tel guarded the important Sorek Valley which was a natural land route up in to the mountains. This area has been fought over countless times throughout history. Archaeological digs have confirmed that the city was destroyed and rebuilt at least six times.

The Sorek Valley and Bet Shemesh were the site of two important biblical stories, Samson in Judges 13-16 and the story of the loss and recovery of the Ark of the Covenant to the Philistines in 1 Samuel 4,6. Both stories occurred in this valley and both stories involve the Hebrews struggle with the entrapments of the pagan Philistine culture. It is fascinating to sit on the archaeological digs and look up and down the valley and imagine what took place here in times gone by.

What does this ancient city have to do with the title of the story, No Pig Bones! When the archaeologists excavated this site, in almost every level of civilization that they encountered, the debris was full of pig bones. Since pigs were forbidden by God for the Jews to eat, there was obviously some serious compromising of the Hebrew faith in these cities! They were obviously adopting the lifestyle of the pagan nations around them and were failing to be true to the commandments given to them by God. Only in the time period of Hezekiah, the famous Jewish king who brought the country back to God, did they fail to find a significant amount of pig bones.

What is the faith lesson here? What are our pig bones? What are the things that we have adopted or taken in from the worldly culture that compromise our Christian walk? Can we dabble in the pagan culture a little bit; eat a little pig meat and still be all right? Does participating in the worldly lifestyle a small amount make that much difference? If they excavated our house in a future time period, what evidence would they find that we only served the one true God? This is a powerful reminder to us as Christians that we must not be compromisers! We must be obedient and be an example to the pagan lifestyle that surrounds us. God is expecting us to be a witness! (Isaiah 43:10-12) No pig bones!

« Don’t Hold Back! A Story at the Jordan River
Tribute to Caesar »