“‘Now this was the sin of your sister Sodom: She and her daughters were arrogant, overfed and unconcerned; they did not help the poor and needy.”
–Ezekiel 16:49 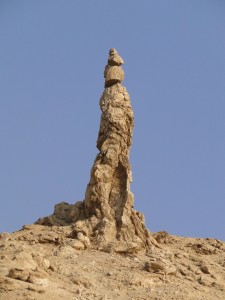 Interestingly, the sin of Sodom that got them nuked was not just sexual sin and perversion like we would think from reading the story in Genesis 19. According to the verses above in Ezekiel, what really angered God was their lack of concern for the poor! God heard the cry of the oppressed people in Sodom, but no one else was paying attention. The townspeople were wicked, not only in their sexual misdeeds, but in the fact that they were oppressing the poor and less fortunate. God saw and heard this and took action on their behalf. What God did to Sodom and Gomorrah shows how much he dislikes seeing the poor and the marginalized taken advantage of and mistreated.

In the ancient world, the salt from the Dead Sea was a very valuable commodity. Salt was a means of currency because it was so precious and not readily available in most areas of the world. The saying, “He was worth his salt” is an example of how they looked at salt as a commodity. In fact, Roman soldiers were often paid in salt and that is where we get the word, ”salary”. Salary comes from the Latin word “salarium”, which means a payment made in salt. Rabbis have long said that Lot went to Sodom because he was in it for the ”salt” (i.e. the money) and didn’t really care what happened to the people around him. Lot paid dearly for that attitude, as his wife was turned into a pillar of salt. If you understand the worth and importance of salt, this story makes a very powerful object lesson!

« The Gospel
Abraham and the Three Strangers »

One thought on “Of Sodom and Salt”