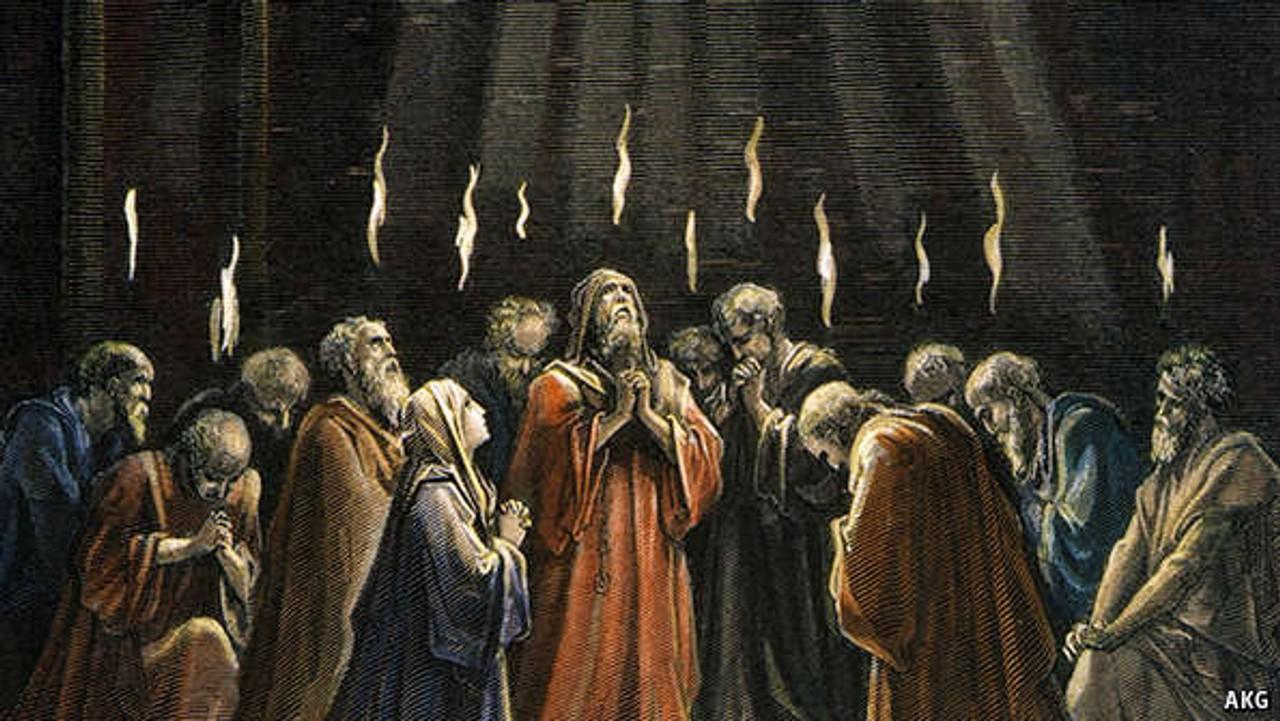 Note: In previous posts, we have discussed different aspects of the Bible event we call Pentecost, where the Holy Spirit came to the believers. The Many Parallels of Sinai and Pentecost, Where Heaven and Earth Meet Part 1 and Part 2, and Pentecost, Where were the Disciples, cover a lot of the background pieces that you will need to know to fully understand this final piece of the birth of Christianity, which took place during the time of the Feast of Pentecost in Acts 2.

However, God did not give up on his desire to dwell with his creation. In Exodus, God chose a group of people to be his own(Exodus 19:5-6) and had their leader, Moses build a tent (tabernacle) that he could live alongside them (Exodus 25:8). With the tabernacle, God could be found again with his creation, living in a small space in the Holy of Holies, on top of the ark of the covenant (Exodus 25:22).

The tabernacle was God’s dwelling place until the Israelites permanently conquered and settled the Promised Land. King David purchased the land to build God a permanent house and brought the tabernacle to Jerusalem. David’s son, Solomon, built the first Temple to give God a permanent place to live with his chosen people in the land that he had given them. After standing for several hundred years, this house was destroyed by the Babylonians, and the Israelites were led into captivity. This temple was later rebuilt in partial measure by the Israelites that returned from that captivity. Four hundred years later, Herod the Great then built a new, much larger and more magnificent temple over the site where Solomon’s temple had stood. This temple was still under construction during the time of Jesus.

The whole world knew that YHVH lived in his temple in Jerusalem. If you wanted to meet with God, you had to come to Jerusalem to his house. Jews from all over the world came at least three times a year to be in his presence. However, access to God was severely limited; only one man could be in His space and then, only once a year.

Finally, God sent his Son, Jesus to earth to complete his plan to fully dwell again with his people. (Jeremiah 31:31-34). While Jesus was on earth, God’s presence was among men; he was God in the flesh. Jesus called the Temple, “My Father’s House” (Luke 2:49 and John 2:16). Now, God’s presence was found not only at the Temple, but in his son, Jesus, and God’s presence was with Jesus everywhere he went. When Jesus completed his work on earth, he ascended back to heaven to be with his Father, at his right hand.

All this background is needed for what happened to the disciples during the Feast of Pentecost. They had waited ten days after the Ascension for the promise that Jesus had made to them of receiving the power of God’s Spirit. On the first day of the Feast of Pentecost, at 9:00 a.m., while they were at the Temple (God’s House), God spirit appeared as tongues of fire and came out of the old house into a new house, the hearts of the believers! He now dwells in a new temple (1 Corinthians 3:16). The corporate body of believers is now God’s house, the building where he dwells (Ephesians 2:19-22 and 1 Peter 2:5). Now, you don’t have to go to the Temple anymore to find God. The house now comes to the people; you bring the presence of God with you, wherever you go. If you want to know what God is like, just look at his house (us) where his spirit lives. At Pentecost, God changed his address and we are his new house. His purpose from the beginning was to intimately dwell with his people and the giving of the Spirit at Pentecost accomplished that purpose, once and for all. We are the beneficiaries of his spirit, not just for our personal edification, but to show to a broken world what God is like and to bring those broken people back to a relationship with him. What an amazing plan and what an amazing God we serve!

« At the Father’s Right Hand
More Thoughts on Pentecost »