Now that we have had a taste of being quarantined, how would you like for that quarantine to last 12 years?

Read these two verses and see what I am talking about:

“A large crowd followed Jesus and pushed very close around him. Among them was a woman who had been bleeding for twelve years. She had suffered very much from many doctors and had spent all the money she had, but instead of improving, she was getting worse.”
— Mark 5:24-26

We don’t know this woman’s name; all we know is that she had a chronic condition. Scripture tells us this condition lasted 12 years. Such a condition would be hard for anyone of any time period. Go back with me 2,000 plus years and let’s take a look into this woman’s world. What would this look like?

It would have meant that this Jewess would have been a social outcast. She contaminated all who came in contact with her. It is possible that every day she would hear the word, “unclean” and she would feel unworthy, unloved, unacceptable, and would be full of shame for something she had no control and had not caused. It would mean that sexually…she could not touch her husband. It would mean maternally…she could not bear children. It would mean domestically…anything she touched would be considered unclean. It would mean spiritually…she was not allowed to go to the temple or even to the synagogue. (Talk about social distancing!) Scripture also tells us that she spent everything she had, but got worse. So, we could add hopeless, financially ruined, and desperate to that list.

However, she had one hope and we find out that she was a pretty gutsy woman. There was a buzz in her village about a rabbi who was healing the lame and the blind. She had to be thinking, “maybe he could heal me” and she takes a huge risk. What if she was recognized? What if she was shooed away? What if she were punished for being in the crowd? What if she was publicly disgraced…again? What if….? 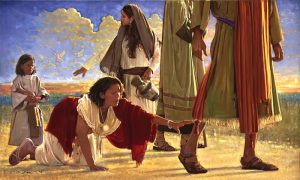 She thought, “If I just touch his clothes, I will be healed. ” (Mark 5:28) Luke’s account says it this way: “She came up behind him and touched the edge of his cloak, and immediately her bleeding stopped (Luke 8:44).” Some translations say, “hem of his garment. ” So, this edge of his cloak, this hem of the garment, what could it mean? The Greek word for hem is “kraspedon” and literally means fringes or tassels. God commanded His people to sew tassels on the four corners of their garments to remember to obey all of His commands (Numbers 15:37). The Hebrew word for corner is “Kanaph” and means “wings.” Jesus, like other Jewish men, would have had tassels sewn on the four corners (wings) of his tallit (outer garment).

I think there is more to this story. This woman would have been familiar with the words of the prophets. Listen to Malachi 4:2:

John the Baptist’s father, Zechariah, prophesied about John and Jesus:

“And you, my child will be called a prophet of the Most High; for you will go on before the Lord to prepare the way for him, to give his people the knowledge of salvation through the forgiveness of their sins, because of the tender mercy of our God, by which the rising sun will come to us from heaven…”
— Luke 1:76-78

P.S. There is another Scripture that goes along with this. “When they had crossed over, they landed at Geneseret. And when the men of that place recognized Jesus, they sent word to all the surrounding country. People brought all the sick to him and begged him to let the sick just touch the edge (tassels; wings) of his cloak, and all who touched him were healed.”

About the author:
Pat has visited Israel and the Middle East multiple times and along with her husband of 50 years, appears in several of the “That the World May Know” videos with Ray Vander Laan.

One thought on “Quarantined; a Biblical story”