When the Sabbath was over, Mary Magdalene, Mary the mother of James, and Salome bought spices so that they might go to anoint Jesus’ body. Very early on the first day of the week, just after sunrise, they were on their way to the tomb and they asked each other, “Who will roll the stone away from the entrance of the tomb?” 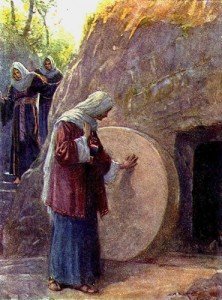 Jesus died at 3:00 p.m. on Friday, which was the day of the Jewish Passover celebration. However, it was also Preparation Day (Mark 15:42-43) which was the day before the Sabbath (Saturday). Every kind of work had to be completed before sundown on Preparation Day (Friday) because no work could be done on the Sabbath. Joseph of Arimathea got permission from Pilate to take Jesus’ body down off the cross just before evening began. Jewish custom was that the body must be buried by sundown on the same day that it was deceased, so they hurriedly wrapped the body in linen cloth and put some spices on it to mask the smell. They then put the body in Joseph’s new family tomb that had never been used (Matt 27:60-61). The Jewish people did not believe in embalming or doing anything to preserve the body (many scholars believe the Jews of the day thought the flesh was where sin resided, so the quicker it decayed and left the bones, the better). A year or so later, the bones would be put in a box called an ossuary and they would rest with their ancestors that were already in the tomb.

The next day was Saturday and the chief priests and Pharisees were concerned about someone trying to steal the body and fake a resurrection. They asked Pilate to seal the tomb with his official Roman Seal and to put Roman guards on the tomb. The seal was just wax and wasn’t designed to seal it shut, just to say this tomb is occupied and you better not touch it or you’ll answer to Rome.

On Sunday, the Marys and some other women went early to the tomb to take the spices that they had prepared to finish the burial process. The Jewish custom was to wrap the body with linen and put lots of spices between the layers of linen. They would put the body on a shelf in the tomb and then close the tomb for three days. They would sit outside the tomb and mourn. At the end of the third day, they would crack open the tomb and call out the name of the deceased (Lazarus – John 11 esp. verse 17 and footnote and 38 and 39). If there was no answer, the deceased would then be legally dead and they would close up the tomb permanently.

When the women asked, “Who will roll away the stone?” the stone was not the problem. They could have gotten the tomb open. The problem was the seal. Who will break the seal and incur the wrath of the Romans? When they got there, the stone was already rolled away and they could look in. Somehow, we get the idea that the angel came and rolled away the stone so that Jesus could get out. Jesus didn’t need the stone rolled back! He was the resurrected Lord! He blew out of there; no grave clothes or stone could hold him back! The stone was rolled away so that the disciples could look in and see that he was indeed gone, that he had risen on the third day, just as he said.

The stone was also rolled away for our benefit, so that we could look inside and see that Jesus was not there. If we believe these truths, that Jesus is alive and risen, we must live in a way that shows that we are confident of these truths. We need to roll away the stone for others around us and let them know that the tomb is empty and that Jesus is alive and risen! The resurrection not only gives us purpose and meaning in this life, but gives us the certain hope of heaven and a life after this life with Christ. A hurting world needs to see that evidence in us that the stone has indeed been rolled away and he is risen!

P.S. When they looked into the tomb, there were two angels dressed in white, one seated at the head and the other at the foot of where Jesus body had lain. This is the exact same picture that we see in Exodus 25:17-23, when God instructed the Israelites to put an angel at each end of the ark of the covenant. Between those two angels (cherubim) is where God lived and met with them. What an amazing picture that was played out 1500 years after the ark of the covenant was made!

« The Resurrection
Mount Sinai & The Mount of Transfiguration »

One thought on “Roll Away the Stone”