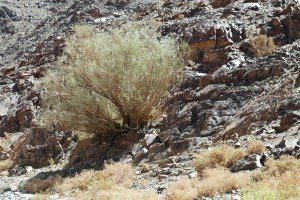 During the time we spent in the desert we were constantly reminded of the biblical imagery that is so wonderfully found there.  Until you’ve actually been in the desert, there’s no way to describe how hot and desolate it really is.  A lizard can’t live there in the summer; it’s often in the 115° to 125° range.

One of the plants found there that is talked about in the Bible is the broom tree, or “Rottem”.  It is one of the main shade trees of the desert.  Although more of a bush than a tree, it was very important as shade to the early wilderness travelers.  Its roots also produce a very hot fire and make the best charcoal available.

There are two Biblical stories that mention the broom tree.  The first one was the story of Hagar and Ishmael in Genesis 21:8-20.  Although the NIV says bush, the Hebrew is “Rikman” which is root word of “Rottem”.  The second story involves Elijah in 1 Kings 19 and here it specifically says, “he came to a broom tree (Rottem) and sat under it.”  These 2 stories both create a desert lesson involving heat and shade.  In both cases, the heat was unbearable and overwhelming and the characters look like they were not going to survive it.  But God came and provided a moment of shade in their desert experience, and they were able to continue on their life journey. 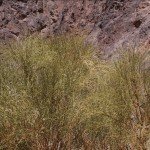 The shape and size of the tree is itself a lesson.  It is not a big tree at all, barely providing enough shade for one man and then not much. It’s not anything like what we Westerners would call a shade tree.  The image of the broom tree is ,”just enough.”  When you come to a desert moment in life, as Hagar and Elijah did and the heat is excruciating and your think you won’t be able to take another step, God is there to provide you a little shade to get you by.  The image is not deep shade or air-conditioning, but just enough shade.  The world we live in is one of intense heat, but around the bend is a broom tree, where we can get a little shade, a little rest, to be able to keep going on life’s journey.  That leads us to the second part of the shade image, which I’m calling Shade II.

« The Desert is God’s Teacher
Downloads »