The words of Deuteronomy 6:4 and the instructions that follow in verses 5-9 are perhaps the most crucial Old Testament texts for the foundational teachings of both Jesus and Judaism. These verses were so important to the lives of the early Jewish people that they became the centerpiece for Jewish daily worship since well before the time of Jesus. In fact, early sources confirm that Deuteronomy 6:4 would have been the very first portions of the Hebrew Bible that Jesus would have committed to memory. Jewish boys were taught this biblical passage as soon as they were old enough to speak. This early teaching was always done by the father, so Joseph would have taught his son the these verses on his knee as a very young boy. It is also important to note that this pivotal set of verses was located as an introduction to the first paragraph of the instructions that God gave to Moses in the book of Deuteronomy. The book of Deuteronomy was by far the most popular text during the time of Jesus. More copies of the book of Deuteronomy were found in the Dead Sea Scrolls than any other book. Jesus quotes from Deuteronomy more than any other book and in the beginning of his ministry, when he was tempted three times by the devil in the wilderness, he quoted three separate verses from Deuteronomy in response (Read Matthew 4:1-11).

These powerful verses from Deuteronomy 6 are referred to by the Jewish people as “Shema”, which literally means “hear” or “listen”. Most Western Christians have never even heard of the Shema. However, these verses were so central to Jesus’ faith that when a teacher of the law asked Jesus what he believed was the most important of all the commandments, his answer was the Shema from Deuteronomy 6 (see Mark 12:28-31). If these verses were the most important commandments in the Bible that Jesus knew, we probably should be more aware of what they say and mean. Let’s take a closer look at each of the six Hebrew words and try to determine what God is saying.

Shema – Literally, “to hear” as a verbal imperative to start the verse. It is much more than just to perceive sound. It means, “listen!” “Focus your attention and heed the following!” 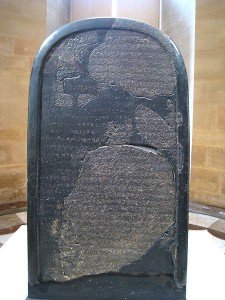 YHVH (or YHWH) – Also called the Tetragrammaton (Greek τετραγράμματον), meaning having four letters. These four letters are the unspeakable name of God and occur over 6,000 times in the Hebrew Bible. As the pronunciation of God’s name was supposed to remain a mystery, his name is written without vowels between the letters. The Mishna states, “He who pronounces the Name with it’s own letters has no part in the world to come” (Sanh. xi. 1). The Jewish people had such a reverence for the name of God that they would not pronounce his name out loud. Instead, they substituted, “Adonai (the Lord) or “Hashem” (the Name). This paints an amazing picture! Our God is invisible, immortal, indescribable and his name is unspeakable! This is why many writers in English, when writing about the Lord, leave out the vowel and write, G-d, to show reverence for His unspeakable name. Although the Bible doesn’t specifically prohibit us from saying His Name, it does warn against using His Name in the wrong way or casually. This knowledge certainly gives us more of an awe when we recite the Shema! Instead of saying His unspeakable name we substitute Adonai and say, “The Lord (Adonai) is our God, the Lord alone”.

Eloheinu – First person possessive and means, ”our God” and puts the proper relationship between Israel and YHVH. He alone is Israel’s God.

Ehad – Means, “one” or “only”. There is not enough space to cover it here but the JPS Torah Commentary Series (Deuteronomy, pp. 76-77) translate “ehad” as, “alone” and explains why that is the best translation.. The Lord alone is the God of Israel and not the myriad of gods that were worshiped by the Egyptians and other cultures. YHVH was a jealous God and was to be their only deity. Israel was to recognize YHVH alone.

To summarize, the Shema is much more than just a creed that we recite to define our faith or a prayer to be repeated. It is an oath of loyalty to the King of the Universe and call to action on his behalf! When we recite the Shema, we are committing ourselves to the Lord alone and to the way of life that He commands. Now that we have been called to attention and proclaimed that the Lord is our God, the Lord alone, let’s see what the Lord asks us to do. We’ll tackle verses 5-9 of Deuteronomy in our next lesson.

« There’s Just Something About That Name
Shema – Part 2 »