“And there were shepherds living out in the fields nearby, keeping watch over their flocks at night.”
– Luke 2:8 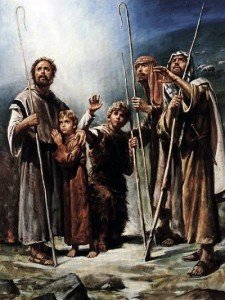 In our Christmas manger scenes there are always several shepherds that are placed around the display. These shepherds are always 35-40 year old, bearded men. In reality in the Middle East, almost all the shepherding is done by very young children, most of them girls. In the Middle Eastern culture, the men do very little of the menial work. You might find them sitting under a tree watching their children handle the livestock, but they rarely do the labor themselves. Even today in Israel, you almost never see older men actually tending the sheep. Instead, younger people are given the job of walking with and taking care of the animals. A great Old Testament example of this is when Samuel came to Jesse’s house to decide who would be the king to succeed Saul. He looked at all the older sons and then asked if there were any more. David, the youngest of the brothers, was out tending the sheep. Most scholars think he was around ten years old when Samuel came to anoint him. It is highly unlikely that the shepherds that were visited by the angels on the night that Jesus was born were older men. They were most likely young boys and/or girls that got to see that miraculous sight. 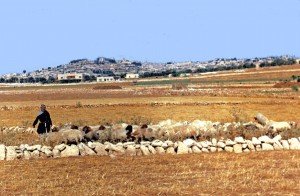 Also, the fact that the shepherds were, “in the fields” is very significant. For most of the year the shepherds kept their sheep in the wilderness or desert areas of Israel. They moved the sheep constantly, looking for enough grass to keep them going. The desert was where the shepherd stayed with his sheep, even from the earliest times in Israel. They only came to and were allowed into the fields at one certain time of year. The word used here for field denotes a specific type of cultivated land, not just land in general. The fields in Israel are only found in a narrow mountainous strip in the center of the country, around Jerusalem and Bethlehem. These fields were where the farmers raised their barley, wheat and other grains. The wheat was typically harvested in late June and July, much the same as in the United States. After the wheat had been completely harvested, there was a two week period where the poor people could come in and glean the fields. God instructed the Jewish people not to cut the corners of their fields, but to leave some for the poor, the alien and the widows (see Leviticus 19:9-10, Leviticus 23:22, and the story of Ruth). Only after the last day allowed for gleaning would the shepherds be allowed into the fields with their sheep to eat the stubble and whatever else remained. The time of year that they would have been allowed into the fields would have been approximately the first to the middle of August. They would have stayed in the fields eating and fertilizing until late September or mid October – departing in time for the owners to prepare their fields for next year’s crop. The early rains in Israel usually start to fall in late October and November and the farmer would have to have his soil prepared and ready by then. If the shepherds were in the fields when Jesus was born, what does that say about the date of December 25 as his birthday? There is a lot more to this that we don’t have time in this limited space to cover, but it is a fascinating study! At the least it certainly begs for the possibility of a different date than what we traditionally celebrate as the birth of the Christ child.

Now that we have covered the trip by Joseph and Mary to Bethlehem, the manger scene and the shepherds, it is now time to take a look at the wise men that came, following a star to this now famous little town in Israel.

« No Room in the Inn
The Wise Men and the Star »

10 thoughts on “Shepherds in the Field”