'The Lord took you and brought you out of the iron smelting furnace, out of Egypt.' - Deut. 4:20

On Saturday, April 5, 2008, we left present day Egypt and crossed the border into Israel at the Taba Border Crossing. The first place we went to in Israel, very close to the border, was a place called Timna. The area around Timna was always part of Egypt, even from the most ancient of times. They have evidence of Egyptian presence there as early as 2800 B.C.  The Egyptian empire controlled this area from then until the time of Solomon, which will be part of our story. Solomon’s Pillars, a prominent natural geographical formation named after the famous king of Israel, is located there, as are Solomon’s Mines. Timna is one of the hottest places on Earth, often getting to 125 degrees in the summer, and is usually over 90 degrees even in December. In Deuteronomy 4:20 it says, “The Lord took you and brought you out of the iron smelting furnace, out of Egypt.”

What is the significance of Timna in the Bible story? The Israelites would have passed very close to here on their way to the Promised Land. There would have been a significant Egyptian presence in Timna at that time because this area produced most of the ancient world’s copper. Copper was mixed with tin to make bronze, which was the dominant metal in the world until the invention of iron by the Philistines (1 Samuel 13:19-22). There was a large slave camp here, run by the Egyptians, to extract the copper from the rock. To get the copper out of the rock and to the right consistency required very hot temperatures. There were almost no trees here, yet they had to bring in huge amounts of wood for hot fires to smelt the copper from the rock. 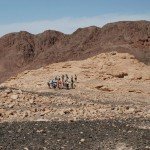 'Slave Hill' with slag visible in the foreground

While we were there, we went up on top of a hill that was called “Slave Hill”.Slag from the smelting process was all over the ground here and you could envision the hard labor that took place.  It was hard to imagine what being a slave here would have been like, in an unbelievably hot climate, with hot fires burning as you worked. It would have been a terrible working environment.

Now fast forward to the time of Solomon in Israel. The first wife that Solomon takes after inheriting the kingdom is the daughter of the Egyptian Pharaoh (1 Kings 3:1-2) which God had specifically told him not to do (Deut 17:17, 1 Kings 11:1-6). Then  he makes a pact with the Egyptians and Pharaoh. Solomon bought large amounts of chariots and horses from the Egyptians (1 Kings 10:26-28) which God had  also specifically told him not to do. In turn, 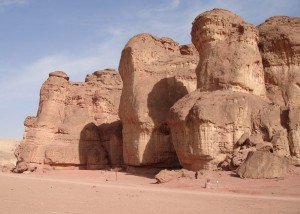 To conclude, Egypt brought tremendous suffering on the backs of their Israelite slaves. God heard their cry and intervened  and freed them from their bondage. God blessed and prospered the Israelites until they too, began to oppress and enslave people. Considering their heritage, it is hard to imagine that the Israelites would ever have thought of having slaves. However, Solomon took the Israelite nation back to Egypt both literally and figuratively. From this point on, God took his hand off Israel and they  quickly went down hill to their eventual demise at the hand of the Assyrians and Babylonians. God did not tolerate slavery and oppression, even if it came from His chosen people.

« Solomon the Wise??
A Teacher’s Tongue »

One thought on “Slave Camp at Timna”