It has been exciting and a blessing to see how the Bible ties together so amazingly. It’s like a big long spaghetti noodle. When you pull it out of the bowl it just stays together all the way through. As we read and walk the Exodus story we begin to realize the common thread runs throughout all the major Bible stories.

In Genesis, God created man and woman so that He could fellowship with him. In Genesis 3, He walked in the garden with Adam and Eve. But then sin entered the world ,first as individual sin, eating the fruit and Cain killing Abel. Then sin began to multiply and became institutional. 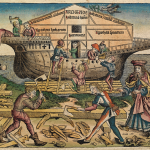 Construction of the Ark 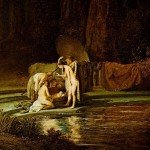 It continued to develop until it finally became a kingdom of evil and God has to do something. In Genesis 6:5, it says that the Lord saw how great man’s wickedness was and that every inclination of the thoughts of his heart was to do only evil all the time. So He sent the flood and destroyed all mankind. However, He saves a remnant of mankind in an Ark (Hebrew tebah – Strong’s 8392) to start over. The word tebah is only used two times in the Bible, once here and once to describe what Moses was put in, on the Nile.

God starts over and makes a covenant with Noah. Once again sin starts as individual sins, but it multiplies into an evil kingdom at the Tower of Babel. At that time, the Bible says there were 70 nations (Genesis 10:2; note 14 from Japheth, 30 from Ham, 26 from Shem). God scattered them over all the earth as He cannot tolerate evil as a kingdom.

God starts over again with His plan to have a people for himself, with Abraham. Fast forward to Joseph and his experience in Egypt. In Genesis 46:27, it says that Joseph’s family numbered 70 in all. 70 nations grow out of Babel, and Joseph comes down as 70 nations.

God saves Moses with a tebah (ark) and uses him to start the process again of saving and starting over with His people. He sends them out on Passover, after killing the firstborn of the evil kingdom of Egypt that had been developed as a result of individual and corporate sin.

God continues to do the Exodus story when His son died on Passover, the day they left Egypt. He died as the Passover lamb. God is still doing the Exodus story today. Our culture is like Egypt.
The point is, the Bible repeats itself over and over with the Exodus story, with God wanting to have a people who are a royal priesthood, a holy nation. God is in the process constantly of redeeming His own.