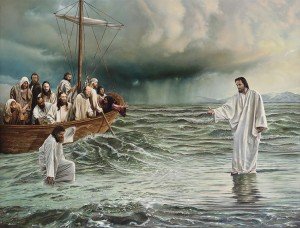 That day when evening came, he said to his disciples, “Let us go over to the other side.” Leaving the crowd behind, they took him along, just as he was, in the boat. There were also other boats with him. A furious squall came up, and the waves broke over the boat, so that it was nearly swamped. Jesus was in the stern, sleeping on a cushion. The disciples woke him and said to him, “Teacher, don’t you care if we drown?”

He got up, rebuked the wind and said to the waves, “Quiet! Be still!” Then the wind died down and it was completely calm.

He said to his disciples, “Why are you so afraid? Do you still have no faith?”

They were terrified and asked each other, “Who is this? Even the wind and the waves obey him!” 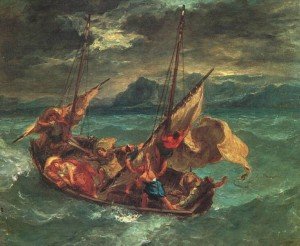 Although Matthew and Luke also record the miraculous story of Jesus calming the storm, Mark’s gospel gives more details and records Jesus’ words as he spoke to the storm. The story is familiar to us; Jesus tells his disciples that they are going to go to the other side of the Sea of Galilee. While they are crossing, a huge storm comes up and threatens to sink the boat. Amazingly, Jesus is asleep on a pillow in the bottom of the boat! The disciples awake Jesus and plead with him to do something. “Don’t you care if we drown?” they cry out. Jesus rebukes the storm and says to the wind and waves, “Quiet! Be Still!”. At once the storm dies down and it is completely calm. The disciples were terrified even after the sea was calm and asked each other, “Who is this? Even the wind and waves obey him!” Admittedly, this was a great miracle, but they had already seen him heal people of various diseases including leprosy, make a paralyzed man walk, restore a man’s shriveled hand and even drive out demons. Why were they terrified enough in this case to say, “Who is this?” What about this act by Jesus to calm the storm convinced them that this rabbi that they were following was without a doubt the son of God? The answer, as usual, is in the Hebrew text! Jesus showed himself to be God by doing the same things that God did in their Hebrew Scriptures. Let’s take a look.

The first connection is from the Psalms, in 107:28. The psalmist, in describing God says, “They cried out to the Lord in their trouble and He stilled the storm to a whisper. They were glad when it grew calm and he guided them to their desired haven.” Then, in Psalm 65:7 it says, “Who stilled the roaring of the seas, the roaring of the waves?” Also, Proverbs 30:4 says, “Who has come down from heaven and gathered up the wind in the hollow of his hands and wrapped up the waters in his cloak?” The disciples knew the Psalms and knew that this man who had calmed the sea must be God because this is what God does!

Another story that would have had a huge connection is the story of Jonah. Like Jesus, Jonah is asleep in the bottom of a boat, during a huge storm and the sailors wake him and ask him the same question as the disciples asked Jesus. “Don’t you care if we drown?” In the Jonah story, God also calms the storm. All these same details demand that the Jonah story be part of this God story that Mark records.

The third story from the Old Testament that the disciples would have no doubt thought back to, is the Exodus itself. When the Israelites were backed up against the Red Sea and Pharaoh’s army was approaching, the were terrified and cried out to the Lord and to Moses. Moses told the people, “Be Still!” These were the exact words that Jesus used to calm the storm. The Messiah who was to come to Israel was supposed to be like Moses (Deuteronomy 18:15). Because Jesus used the exact words that Moses had used as God’s messenger, the disciples must have made another connection and thought to themselves that Jesus was the second Moses! He is the one who is to come to us, the prophet!

To look back to the Hebrew Scriptures that Jesus and his disciples would have known so well is like looking at the same room from a different window. Looking at the New Testament through the window of the Old Testament doesn’t change the story, but it makes it so much deeper and richer. The deeper you dive the deeper it gets. There is so much more in the text than we see on the surface. This story of Jesus calming the storm is just one of the many examples. 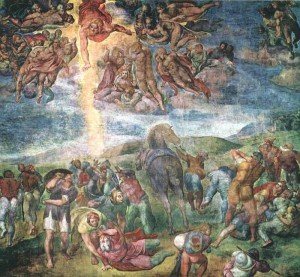