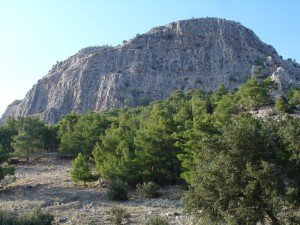 When I first went to the ruins of the ancient city of Priene, Turkey, I was mesmerized by the high cliff that is the backdrop for the city. We were told that there was an ancient set of steps that had been carved into the cliff face, allowing you to go all the way to the top. Our leader and guide for the trip, Ray VanderLaan and his son Jeff, had actually made the ascent and were saying what a tough, but awesome experience it was to climb all the way to the top. I left there wondering if I could make that climb at my age and what it would be like. Every time I would look at the cliff in my pictures, I would think about that climb.

Four years later I learned that I would again be going to Turkey on a study trip. One of the first things that came to my mind when I learned that I would be going again, was the acropolis at Priene. I knew that RVL would lead a group to the top. Would I be one of them? As I exercised and prepared for the trip, the picture of the cliff was always in my mind. I wanted to successfully make that climb. It was like a carrot dangling out in front of me to keep me motivated and get in shape.

On the eighth day of our trip I got to see Priene and the acropolis again. I had a hard time listening to the faith lessons because I knew what would be happening at the end of the day. As we finished our last session, RVL issued a command,”Let’s go-come follow me” and we climbed up out of the ruins and started up the steep incline towards the cliff face. 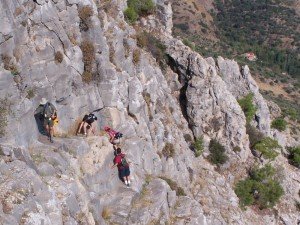 The trip to the top was a lifetime experience for me. It was by far the toughest vertical climb of the trip and was my personal hardest hike up to that point. Although it was a struggle, I made it to the top in good shape. However, I watched many people really struggle with the climb. Fear of heights and drop offs plagued several people and many tears were shed as we hugged the wall up the narrow trail. Bad knees and age also hampered quite a few. But, by God’s grace, we all made it to the top together. Once on top, we got as close to the edge as we dared and took pictures of Priene and the valley below.

Several faith lessons jumped out at as we completed this hike. One thing I immediately noticed as we topped out on the cliff was that this wasn’t really the highest point on the mountain. Right behind us was another cliff that went up as high again as the one we had just climbed. I thought to myself, “That is so typical in life, just when you thing you have overcome and reached the end of a situation, then there is another hill to climb right in front of you”. I also thought, ”it was probably a good thing that I didn’t know that there was another one waiting for us or I might have gotten discouraged and not even tried to make the climb.”

If you look at the cliff from below, it looks impossible to climb. The cliff face is sheer, vertical and huge. It looks as if only a technical climber with specialized equipment could scale it. But, we had a guide that had already taken the path before and knew the way to the top. We got to our destination by following our guide and watching the feet of the person ahead of us. What a great life lesson this is. If you look at the huge cliff as a whole, it looks impossible, but by taking one step at a time, behind our guide, we made it to the top.

Another lesson we learned while at the top, was to look at things from God’s perspective. It was a common practice of the ancient rabbis to take their disciples up on a high mountain and let them look below at an advancing army or a city and see how small everything looked. When you are down on the ground floor looking at a problem, it looks pretty imposing. But, when you are looking at it from a heavenly perspective, it’s not that big. It was a huge faith builder for me to think of God in the heavens, looking down at my problems and seeing his perspective on it. Vast armies don’t look that big when you are looking from a high vantage point.

3 thoughts on “The Acropolis at Priene”