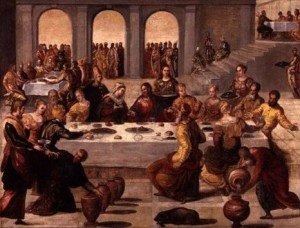 After the father meets and reconciles with his lost son, he orders a banquet to be held. He says in Luke 15:24, “Lets have a feast and celebrate, for this son of mine was dead and is alive again, he was lost and is found”. In the father’s perception, his son was lost and dead at the edge of the village and he went out in a costly demonstration of love to find and save his son. This brings up an important question. Was the banquet held in honor of the prodigal or in honor of the father? We usually think that the banquet is to honor the son. However, is it a celebration of the prodigals successful efforts at reaching home on his own, or is it a celebration of the success of the father’s costly efforts to find and save his lost son? If you compare this celebration to the most important banquet in the gospels, the Last Supper, you see some amazing similarities and truths of the gospel message. A part of the meaning of the Last Supper meal is that we as redeemed sinners are offered continued table fellowship with Jesus. The Last Supper is a celebration of Jesus’ costly sacrifice to reconcile us to himself. Isn’t this banquet that the father gives for his son a foreshadowing of the Holy Communion, where we are invited as sinners to participate in that sacred meal? Jesus is obviously the hero of the Last Supper Banquet and the sinners are not the center of attention. All glory is reserved for the father. Jesus does not eat with sinners to celebrate their sin, but to celebrate his grace. This banquet, ordered by the father, is a celebration of the costly efforts and great sacrifice the father has made and sinners (the lost son and the older son) are invited to come.

The older son has a real problem with the idea of grace being given to the younger brother. He doesn’t think that there should be any reconciliation without compensation. Why didn’t he have to pay back all the money he lost before the father took him back? He wasn’t having to pay for his sins! Grace was offered and accepted without the requirements of the law having been met. Grace is not only amazing, but unbelievable! How can it be true? Don’t we get what we pay for?

The older son refuses to participate in the celebration and attacks both his father and brother in public. In doing so, he insults his father in front of all the guests. A western cultural equivalent would be to have a shouting match with your father at a wedding. Now, the older son has also severed his relationship with the father. What will the father do? Culture would expect that the father would explode and reprimand the older son for the dishonor that he has caused. However, again the father is willing to offer a costly demonstration of his unearned love. Only now it is offered to the law keeper instead of the law breaker! He leaves the banquet and entreats the older son and offers him the same costly undeserved love.

The parable has no ending in that we don’t know what the older son decides. Will the older son now enter the banquet and start acting like his father or will he refuse to accept his father’s offer of costly, unearned love? The reader is invited to provide the ending.

In our final segment we will try to summarize what we have learned and look at the theological themes that are present in this unbelievably complex and fascinating story.

2 thoughts on “The Banquet and the Older Son: Part 4 of a Study of the Prodigal Son in Luke 15”