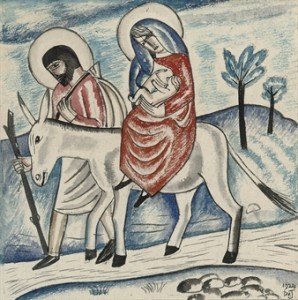 Mary and Joseph with baby Jesus and the donkey --David Jones, C.H.

The events that comprise the well-loved Christmas Story are known to almost everyone and especially all Christians. Joseph and Mary’s journey to Bethlehem, no room in the inn, the baby born in a stable and the manger scene; shepherds in the field, three wise men bearing gifts and the star that they saw are all scenes that immediately bring up pictures in our minds. They are very familiar to us and are deeply embedded in our Christian consciousness. However, is it possible that over the centuries, special ways of seeing the story have developed that are not necessarily part of the Text? The more familiar a passage becomes and the more people that are telling the story, the bigger the chance that some interpretive glitches could occur. Is there a difference between what the Text says and our traditional understanding of our beloved Christmas Story? Let’s take a look first at Joseph and Mary as they return to Bethlehem about the time of Jesus birth.

In the first three verses of Luke 2, it says that the Romans ordered a census to be taken and everyone had to return to their own town to register for the count. For Joseph, the town of his origin would have been Bethlehem. The telling of the Christmas Story over the years has led us to believe that Joseph and Mary were going to a town where they didn’t really know anyone and weren’t really treated all that hospitably. Nothing would have been farther from the truth. In the Middle East, historical memories are long and very important. Joseph was the son of Heli, son of Matthat, the son of Levi (Luke 3:23-24) and because of that lineage almost every home in town would have welcomed him. Joseph was from the royal lineage of the family of King David. The family of King David was so famous in Bethlehem that the village itself was called, “City of David” (see Luke 2:4). Being from that family, Joseph would have been welcome anywhere. The would have been thought of as “royals” in Bethlehem and important people. Mary was also of the House of David and would have also been required to register. In addition, Mary had relatives living nearby. Elizabeth and Zechariah also lived in the hill country of Judea around Bethlehem.

Another interesting piece to our picture of the story is that Mary arrived riding on a donkey. The Text doesn’t say this and it is unlikely that Joseph and Mary owned a donkey. Donkeys and mules were the mount of kings and only the most wealthy owned them. We know later in Luke 2:24, when the parents took Jesus to the Temple to present Him to the Lord, they offered a sacrifice of two doves or pigeons, which was what the poorer people offered (read Leviticus 5:7) if they couldn’t offer a lamb. Common people walked everywhere and it is very likely that Joseph and Mary made the three day journey from Nazareth to Bethlehem on foot and not riding on a donkey.

Next, lets take a look at Mary and the timing of Jesus’ birth. In every culture a woman about to give birth is given special attention by the community. Surely Bethlehem was no exception. They would have never have turned away a descendant of David in his home town while his wife was about to give birth. This would have brought much shame to the entire community. Also, our knowledge of the Christmas Story always assumes “the imminent birth”, or the fact that they had the baby as soon as they got to Bethlehem. They were willing to accept any shelter, even a stable, because of the almost immediate expected arrival of the Child. However, this is not what the Text says. Luke 2:6 says, “while they were there, the time came for the baby to be born.” This actually implies that they were in town some days before the baby was born. Joseph would have had adequate time to arrange a place for them to stay while they were in town. They would have been among people who knew them, respected them and were willing to assist them in the birth of their baby.

To summarize, we have noted several differences from the traditional understanding of Joseph and Mary returning to Bethlehem for the birth of their baby found in Luke 2:1-6. Joseph and Mary were returning to their home village where they could have easily found shelter because they were well known. Also, because Joseph and Mary were descendants of King David, they would have been well received. Mary had relatives nearby and they could have even gone there if there wasn’t any space in Bethlehem. They would have made the three day journey on foot. The Text seems to imply that they were in Bethlehem for at least a few days before the baby was born. The community would have definitely wanted to help a young Jewish woman as she was about to give birth. These interesting illuminations about the events don’t cheapen the story, they really enrich it. But, it just shows how the story over the years took on different elements that are not found in the actual reading and understanding of the Text and the culture in which the story is set. Next, let’s look at the inn and the manger scene and see what we find any differences there.

One thought on “The Christmas Story: Part 1 Joseph, Mary and the Imminent Birth”