Then Jesus said to his disciples, “Whoever wants to be my disciple must deny themselves and take up their cross and follow me.
– Matthew 16:24 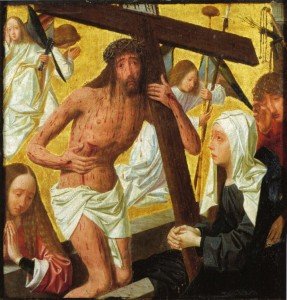 As I relived the events of Passion Week during this recent Easter season, I couldn’t help but think about the dichotomy that exists between modern disciples of Jesus and those that actually followed Him during His time on this earth. The triumphal entry, the Lord’s Supper, the events at Gethsemane that led to His arrest, His trial, crucifixion, and three days later His resurrection must have been a whirlwind of emotions for Jesus’ band of followers. These men (and women) had been with Him for three years. They had seen all His miracles and listened to Him as He said time and again that He was God’s son come to earth to live among men. They were convinced that He was the one that God had promised to come to Israel to be their Messiah, their new king over their nation.

Jesus’ disciples then definitely wanted His kingdom to come. They were desperately hoping that He would deliver them from the hands of the evil Romans and establish a new kingdom and rule and reign here on earth. Jesus would be in charge, evil would be in check, and they would be His right hand men in helping to bring the good news of the kingdom to their fellow Israelites. The disciples were ready to die for their leader and would have done anything to help establish His kingdom and defeat His enemies. They had already given up everything to follow Him up to this spot. They definitely did not want Jesus to die on the cross. That would have been the worst possible outcome because the chance to establish a kingdom would die with their leader. They knew what the results of the cross were. The cross would have been a complete defeat for their mission. The kingdom was paramount and the cross was unthinkable.

Here is the dichotomy: today’s disciples of Jesus seem to face the opposite scenario. We love and need the cross and celebrate Jesus’ willingness to die on it on our behalf. We are glad, not that He suffered, but that He paid for our sins by that act of selflessness. The cross to us is victory – victory over sin and God’s enemies. However, the idea of establishing His kingdom here on this earth is another matter. To be willing to die or suffer, or even give up our time on Christ’s behalf to bring His kingdom to this earth is not nearly as appealing as the idea of the cross. We have the cross and Christians tend to think of that as the end game. Jesus paid it all and praise God we are saved! But, bringing the kingdom is just an integral part of Christ’s message as the cross. We are to bring His kingdom here on earth regardless of the cost or consequences because He is our king and we are His subjects. He has left us here to be His right hand men to make sure everyone knows, understands and also obeys His will. It has never been just the kingdom or just the cross, it has always been both. May His kingdom come and His will be done on earth, just like it would be done in heaven!

« The Resurrected Dead
Are You the Coming One? »