“For he (Christ) himself is our peace, who has made the two one (Gentiles and Jews), and has destroyed the barrier, the dividing wall of hostility, by abolishing in his flesh the law with its commandments and regulations.” – Ephesians 2:14-15

“When the seven days were nearly over, some Jews from the province of Asia saw Paul at the temple. They stirred up the whole crowd and seized him, shouting, “Fellow Israelites, help us! This is the man who teaches everyone everywhere against our people and our law and this place. And besides, he has brought Greeks into the temple and defiled this holy place.” (They had previously seen Trophimus the Ephesian in the city with Paul and assumed that Paul had brought him into the temple.)” – Acts 21:27

In 19 B.C., when Herod the Great began his most ambitious building project to rebuild the Temple to YHWH, he wanted everything done on a grand scale. The Temple enclosure that he built was the largest religious structure in the world at that time by two and a half times. It was 1200′ long North to South, and 900′ wide East to West and the Temple itself was fifteen stories tall. The Temple grounds consisted of five different courts; the Gentile Court, Court of Women, Israelite Court, Priest’s Court, and the Holy of Holies. By far the largest of the courts was the Gentile Court. The Gentile Court was 1200′ in length and surrounded the entire Temple area. It was paved with marble and was surrounded by colonnades on all four sides. This court was the Jew’s way of responding to the Prophet Isaiah’s decree five hundreds years previous, in Isaiah 56:3-7, that all the nations of the world would come to Jerusalem to worship YHWH and that his House would be called a House of Prayer for all the nations. It was not called the Gentile court because Jews didn’t go there, but because this was as far as the Gentiles could go in the Temple enclosure to worship the Jewish God. 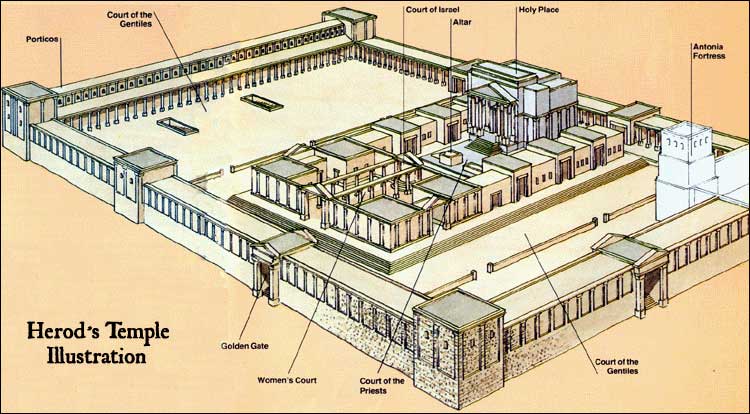 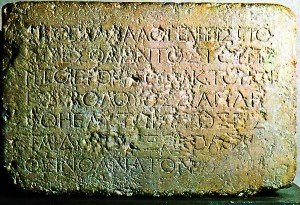 A low wall separated the Gentile Court from the Temple enclosure itself. This wall was called, ”Soreq”, in Hebrew, and had thirteen openings in it to allow Jews only to enter from the Gentile Court into the four other courts. No Gentile was permitted past this dividing wall. “No Entry” signs were posted on the wall in three different languages. In fact, one of these signs in stone has been found and is in the Museum in Istanbul, Turkey. It reads, “No foreigner is allowed past this point on penalty of death”.

This fits perfectly into the story in Acts 21:27-29 where Paul is accused by the Asian Jews of taking Trophimus past the barrier and into the place that was for ”Jews only”. All this took place during the Feast of Pentecost, so the entire Temple area was packed with pilgrims coming to the Feast. A riot started and the Romans had to step in to save Paul from being killed by the mob.

Now re-read the passage in Ephesians 2:14-15. The words of Paul suddenly jump off the page as we see the picture he is trying to present. Was Paul talking about the Soreq? Jesus’ coming was intended to break down the barrier between Jews and Gentiles and do away with a need for the two to be separated.  This story is another great example of how knowing about the world of the Bible helps us to understand better the words of the Bible.