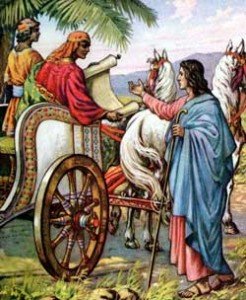 I was reading out loud in Deuteronomy Ch. 23:1-2 where it says that a eunuch “may not enter into the assembly of the Lord” and I remembered the New Testament Story of the Ethiopian Eunuch in Acts Chapter 8:26-40. My interest was piqued and I began to dig through my trip notes and do some research on my own to see what I could find.

First of all, what is a eunuch from Ethiopia doing in Israel and is there more to that story? The country of biblical Ethiopia was called Cush in the Hebrew Old Testament, and was also called Sabea or Sheba. It was south of Egypt and was a mercantile kingdom that brought goods from the sea trade by caravan north through Israel, Damascus, and Syria. The word,”Ethiopia” translates in Hebrew as “burnt face”, referring to the black race of people who inhabited the country. The Queen of Sheba visited Solomon in the Bible in l Kings 10 and was very impressed with Israel and Solomon as a leader. Verse 11 says that King Solomon gave the Queen of Sheba all she desired and asked for. Although there are no facts to support it, early Christian lore always had it that the Queen of Sheba went back to her country pregnant with King Solomon’s child. If this was true it sure makes for some interesting thoughts. From that time froward the Ethiopians adopted the God of Israel, YHWH, as their God and the two nations became very strong allies. Jesus even refers to this event with the Queen of Sheba in Luke 11:29-2 (Matt;12:39-42).

Why was the eunuch in Israel? There was a trade route that came from Ethiopia up through the Gaza Strip into Jerusalem. The eunuch, a Gentile believer in YHWH, would have gone up to Jerusalem for one of the three major Jewish feasts of Passover, Pentecost or Sukkot. This would have been an extremely long and arduous journey for the traveler. The Acts passage says that the eunuch was an important official in charge of all the treasury of Candace, queen of the Ethiopians. Candace was not a personal name, but was a title held by several queens of that kingdom, similar to the title of Caesar, and meant “queen or queen mother”. The eunuch must have been very wealthy because in Acts it said he was reading from his own scroll of Isaiah and there were very few handwritten copies of the text available. He also must have been a humble man because he allowed a common man like Phillip to come up into his chariot to explain the Scriptures to him. It is interesting to think that the eunuch would travel all that way to Israel if he knew the Deuteronomy passage which told him he couldn’t go into the temple when he got there.

The fascinating part of the story however is that when Phillip ran up to the chariot, the eunuch was reading from the prophet Isaiah in chapter 53:6-8. In these passages Isaiah is prophesying about the coming and the suffering of the promised Jewish Messiah. The eunuch asked Phillip, “Who is this Scripture talking about”? The text says that Phillip began with that very passage of Scripture and began to tell him of the good news about Jesus.

Usually, we stop right there with Scripture and that’s the end of the story. But if chapter 53 was where they began, would Phillip and the eunuch have continued reading in Isaiah as far as chapter 56:1-8? “Let no foreigner who has bound himself to the Lord say, ‘The Lord will surely exclude me from his people’. And, let not any eunuch complain, ‘I am only a dry tree’. For this is what the Lord says, ‘To the eunuchs who keep my Sabbaths, who choose what pleases me and hold fast to my covenant, to them I will give within my temple and its walls, a memorial and a name better than sons and daughters. I will give them an everlasting name that will not be cut off’.” Then it goes on to say, “If you will keep my commands, I will give them joy in my house of prayer, for my house will be called a house of prayer for all nations.” (This is the same passage of Scripture that Jesus quoted when he cleared the Temple.)

Phillip used these passages of Scripture to show the eunuch that Gentiles were in and that Jesus was the way in. There were no more exclusions because his offer extended across all boundaries. The eunuch, seeing all these promises specifically for him, asked to be baptized by Phillip.

The Scripture then says that when they came out of the water, the Spirit took Phillip away and the eunuch did not see him again, but he went on his way rejoicing. It’s not clear from the text which one of them “went on his way rejoicing”, but I can definitely see it for both of them. Can you imagine the joy of the eunuch as he realized that salvation was also for him and not just the Jew; that he was not excluded any more from the assembly of God’s people, because of what Jesus had done. Phillip, also went on his way rejoicing because he had seen another person understand and accept Jesus’ sacrifice. He had heard and seen Jesus in the Temple when he declared that “My house shall be called a house of prayer for all nations”. Phillip would later take that wonderful promise to Asia Minor and spend his life telling the Gentiles, “You’re In! My God is a God for all the nations!”

This story of Phillip and the Eunuch is another wonderful example of how much deeper the meaning of the text is if you know your Bible and the culture and history of the time period. Phillip definitely knew the text and how to point someone to Messiah Jesus from the Hebrew scriptures. If we were asked the same question on the Isaiah scriptures would we be able to use them and tie them all together and point the way to our Messiah?

P.S. If you look at the Acts passage in your Bible, you will notice that verse 37 is missing from most translations. The Scriptures just go from verse 36 to verse 38. However, if you look at the footnote on verse 37 , you see the verse that was included in later manuscripts. It reads, “Phillip said, “If you believe with all your heart, you may.” The eunuch answered, “I believe that Jesus Christ is the Son of God”! What a great verse and a textbook salvation experience! What an interesting footnote!

« Entering the Chaos
The Temple Tax »

7 thoughts on “The Ethiopian Eunuch”