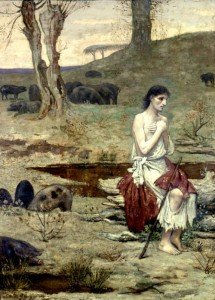 After turning his inheritance into cash, the prodigal son sets out for a distant country. This country was definitely not Jewish, so it is obvious to the reader that he is among the Gentiles (goy or goyim pl., in Hebrew). There, the text says he squandered his money in wild living until all of it was gone. The prudent thing to do would have been to go home, back to his own people. But, he has broken the rules of the community and done the unthinkable, losing all his inheritance to the Gentiles. He knows the Kezazah (cutting off) ceremony awaits him unless he can find a paying job and recoup the money he has lost. The prodigal hires himself out to a pig herder to feed his swine, but he is treated so poorly that he is about to starve to death. By going to a Gentile country and working for a gentile feeding his pigs, the story teller is saying, “He has gone as far away from his family and God as he can possibly get.” To feed pigs would have been the ultimate indignity for a Jew not only because the work was distasteful and they are dirty creatures, but God had told the Jews that pigs were unclean animals (Leviticus 11:7). Now there is no other option left but to go home and ask for employment as a hired hand working for his father. But, how can he possibly get his father to trust him and take him back? He has burned all his bridges behind him.

It is at this point in the story that the most theologically damaging misinterpretation of this parable occurs. Luke 15:17 in the NIV says ,”When he came to his senses” and the KJV says, “And when he came to himself”. This is most often interpreted as “He repented”. If this phrase is understood as repentance, then the theological unity of the the three “lost” stories in Luke 15 has been broken. Repentance in the first two stories is merely the “acceptance of being found”. Both the sheep and the coin were hopelessly lost and could do nothing to find themselves. They had to be rescued by a hero figure (savior). If the prodigal manages to save himself and make his own way home by his own efforts, then the third story is the exact opposite of the first two. If he repents in the far country and struggles home on his own, theological confusion sets in and the reader is left to wonder what repentance really is. Can we return to God without His aid or does He have to come after us?

The answer lies in the translation of that phrase, “He came to himself”. Middle Eastern and Arabic translations of this phrase paint an entirely different picture. They translate Luke 15:17 as , “He got smart”, “He thought to himself” and “He took an interest in himself”. They never thought of him as repenting and returning to his father, but returning to himself. In other words, the prodigal has to develop a plan to get himself out of this mess – and he does.

What about his confession that he concocts in verse 18, “I have sinned against heaven and before you”? This is where our lack of knowledge of the Hebrew scriptures gets us in trouble. Well known to the Pharisees and teachers of the law who were hearing this parable was the fact that this is the exact same phrase that Pharaoh said to Moses in Exodus 10:16 when he was trying to manipulate Moses into stopping the plagues! Everyone knew that Pharaoh was not repenting! He just wanted the plagues to stop! The prodigal son’s statement that he had sinned was designed to produce the same result. He was trying to think of how he could soften the expected anger from his father and convince him to let him back on the family farm as an apprentice to one of his hired hands (see verse 19). There is no hint of remorse in his statements; he wants to eat! Evidently, his father’s hired hands made enough money to even have some savings as verse 17 indicates (bread enough to spare). If the son can recover the lost money through working for his father, then he could feel reconciled and would have worked his way back.

This part of the story is so interesting and ties back to the salvation message because the son is trying to “keep the law” by working his way back to salvation. Grace is unnecessary if he can manage it on his own. The prodigal sees it only as matter of lost money, just a broken law. However, the real sin is the broken relationship with his father. The son has done everything wrong to this point. Now he has a plan to work himself back into the good graces of his father. In our next lesson we’ll see how his plan worked out.

« The Request For the Inheritance: Part 1 of the Study of the Lost Son Parable in Luke 15
The Return Home: Part 3 of a Study on the Prodigal Son in Luke 15 »

One thought on “The Far Country: Part 2 of a Study on the Prodigal Son in Luke 15”