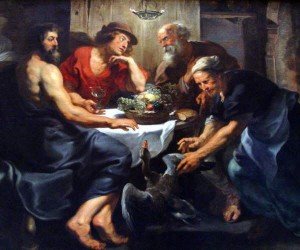 Towards the end of their first missionary journey, Paul and Barnabas were forced to flee from Iconium (Acts 14:5-6) into the rural and relatively uninhabited countryside of the province of Galatia. After traveling on foot for over twenty miles in “no-man’s land”, they came to the rural outpost of Lystra. Lystra was in the district of Lycaonia, which means, “wolf land” and was a backwater location. The people were so backwards there that they still spoke their original Lyconian dialect and had never learned Greek or Latin.

Upon arriving in town, Paul saw a lame man who was crippled from birth and had never walked. Paul spoke to the man and realized he had the faith to be healed, so he told him to stand on his feet and walk. Miraculously the man was healed and the people in Lystra who witnessed the miracle went crazy! They began to shout, “The Gods have come down in human form! The Gods have come down in human form! They called Barnabas, Zeus and Paul, Hermes and tried to worship and sacrifice animals to them! Paul and Barnabas had to rush into the crowd and stop them saying, “Don’t do this! We are men just like you!” What was going on here? What was happening in this strange story in rural Galatia? Knowledge of Greek mythology surrounding this area of Lycaonia, makes this story extremely fascinating and will give us an understanding as to why the towns people were so excited. Listen to the ancient legend that was supposed to have taken place right here in this area many years before:

Zeus and Hermes decided to leave the heavens one day and visit Lycaonia to see how friendly the people were. Disguised as mere humans they entered the city and began knocking on doors and requesting food and lodging. Everyone was extremely unfriendly and no one would give them the time of day. They were rejected thousands of times. Finally, at the edge of town, the gods encountered an old woman and her husband, named Baucus and Philemon. They quickly welcomed the strangers into their simple home and offered them all the food and drink they had. They even tried unsuccessfully to catch and kill their only goose to eat, to the extreme amusement of the strangers. They entertained their guests wonderfully until nightfall and then the old couple gave the strangers their bed and they slept on the floor. When morning came, Zeus and Hermes revealed their identity to the old couple. They told them the story of what had happened the day before with the towns people. Zeus and Hermes then completely wiped the town off the map and put a lake in it’s place. On the shore of the lake, they built a castle for Baucus and Philemon. They also gave them one wish and their wish was to be together forever. The gods granted them their request, so that when they finally died, they would turn into and oak and linden tree that were entwined together.

When you know this story, the text quickly begins to make sense. When the Lycaonians witnessed an obvious miracle, they knew the gods were back in town! “The gods are back”, they thought, “We can’t mess up again! Let’s handle this the right way this time!” They rushed to shower gifts and kindness to the gods that had once again visited their small city. Barnabas must have been the more imposing of the two, because they assumed he was Zeus, the supreme god and the one that they had a temple to in town (Acts 14:13). Hermes was the messenger god, so Paul must have been the one doing most of the talking! You can really get a great mental picture of what that scene must have looked like. Paul and Barnabas probably had no idea about the legend and didn’t know what in the world was happening. You can imagine how they tried to stop them when they didn’t speak the Lycaonian language! There must have been some really tense but also comical moments!

This is another great example of how knowing the culture makes such a difference in understanding some of the Bible stories. The Bible events took place in time and space and they had their cultural mores, customs and stories that were passed down, just as we do. It is so exciting to be able to learn some of these and thus unlock some interesting details of the narrative that would otherwise be unknown. This Bible passage from Acts, which on first reading seems to make little sense, becomes a fascinating story of the culture and times of the people that Paul and Barnabas were trying to reach with the good new of the God of the Bible and his son, Jesus, the Christ.

« Christ Crucified – A Stumbling Block to the Jews
Timothy, The Unlikely Disciple »

2 thoughts on “The Gods are Back!”